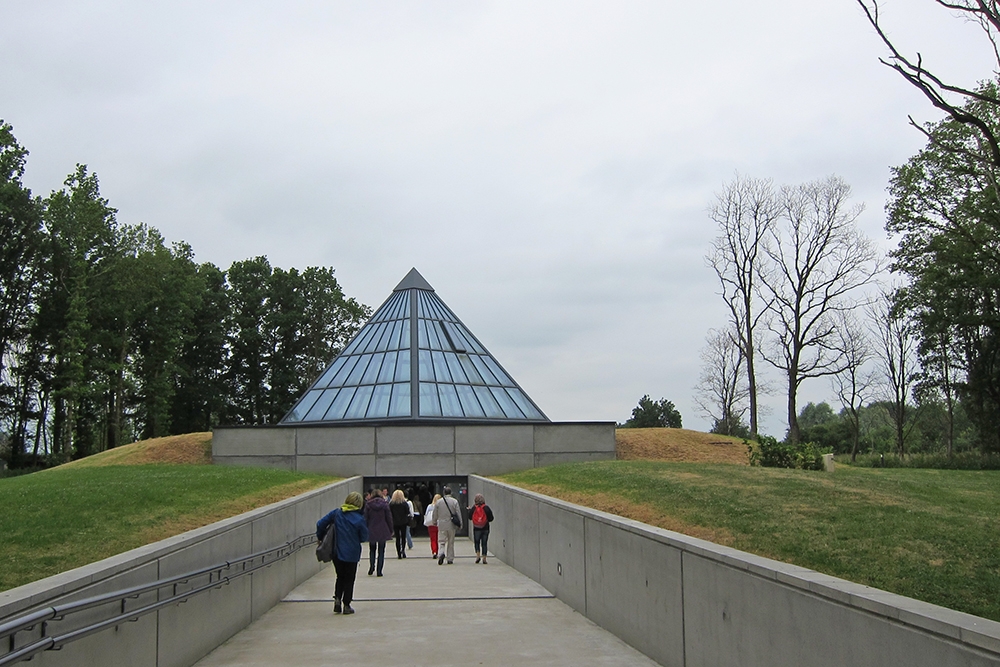 All history is personal when you dig deep enough.

That’s why I carry a bulky loose-leaf binder on a recent trip to Belgium. The country is marking the 100th anniversary (November 11, 2018) of the armistice ending World War I.

The centenary of the armistice has revived interest in the woefully misnamed “War to End All Wars.” During the 1914 to 1918 conflict, an estimated 18 million people died—11 million military personnel, seven million civilians.

One hundred years later, the death toll of World War I often seems abstract. But the story clasped by the three rings of the binder makes the horrors of battle real to me.

The pages are photocopies of the journals written by my husband’s maternal grandparents: Patricia Stopford of County Wexford, Ireland, then age 19; and Alec Ernest Saxton, a 22-year-old English lieutenant in the Duke of Cornwall’s Light Infantry during World War I.

“I was the shameless hussy who followed the example of many other lonesome girls and put in the ad: ‘Irish girl would like to correspond with a lonely soldier,’” Patricia begins in her memoir.

Her request for a pen pal—placed in the London Times in 1915—drew a response from Alec. He notes in his diary in April 1916:

“My ‘Advertisement Irish Girl’ has answered me… Already I dream of a delightful camaraderie. Well, she is really Irish, so she may be pretty. Her photograph should arrive in a few days.”

But for the carnage of The Great War, the two likely would never have met. Patricia was an aristocrat, the granddaughter of the Fifth Earl of Courtown. Although Alec graduated from St John’s College, Oxford, his background was humble, his father working as a custodian in a London office building.

I think deeply about the fates of Alec and Patricia as I travel through Belgium. During World War I, this small country wedged between France and Germany literally was the Western Front, which stretched 450 miles from the North Sea coast to the Swiss Alps. As a result, Belgium has dozens of museums and memorials that appeal to military history buffs.

In between visits to important battlegrounds and other sites, I read Alec’s journal.

IN THE TRENCHES AT YPRES

“Life is very much the same each day in the trenches—unless you get wounded or killed.”

Alec writes his war accounts with a devil-may-care jauntiness I thought only existed in Masterpiece Theatre scripts. Here’s another example:

“Saw Carter today. He is back again for the third time; this time he has returned minus a finger. He won’t get killed; he will only have bits chipped off him. Next time he will lose a toe or something silly like that.”

War, however, was grimmer. Alec fought at Ypres, which the British referred to as “Wipers” because of its unpronounceability for Anglos. The front lines of the war ran through the town and other hamlets in northwestern Belgium near the French border for four years, causing one million casualties.

“Ypres lingered on for a long while, until at last it died of wounds, in agony and torment; died with curses on its tongue, with prophesies of retribution on its lips,” Alec recorded. Even after a century, farmers often bring up bones when they plow their fields.

Topped by a glass pyramid and partially built into the ground—recalling the trenches that made up the front lines—the Plugstreet 14-18 Experience opened in 2013. This World War I interpretation center offers films, photographs, and maps that round Alec’s recollections of the bloodshed into reality.

A visit begins with an interactive map that traces the start of World War I. “What countries are you from?” the tour guide asks people surrounding an interactive map. “U.S., England, Croatia, Hungary, France, Russia, Turkey…” visitors answer. “This will show how you all went to war with each other,” the guide replies as he presses a button.

The conflagration eventually involved 32 countries. It ended the German, Austro-Hungarian, Russian, and Ottoman empires, and caused the collapse of the Hohenzollern, Hapsburg, and Romanov dynasties. And, sadly, it set off the chain of events that launched World War II.

SMALL PEACE IN A GREAT WAR

“Such a lovely day today… the earth growing gay with flowers. And in the distance, alas, those two thin straggling lines of trenches, which seem to lie like a pair of horrible serpents across the horizon, fouling the land and bringing shadows and sorrows upon everybody.”

Red poppies sprouted all along the Western Front in spring. For soldiers, the fragile blossoms symbolized the renewal of life amid death. Scarlet petals bob everywhere in June when I visit St. Yvon, which witnessed one of the most poignant encounters of World War I: the Christmas Truce.

On December 25, 1914, French, German, and British soldiers along the Western Front staged an unofficial cease-fire, venturing into the bombed-out no man’s land between the front lines to exchange cigarettes, swap buttons from each other’s uniforms, and sing holiday carols. At St. Yvon, they also played soccer.

Alec’s journal starts in 1916, and thus does not record the Christmas Truce. However, other documents do. “A German looked over the trench—no shots—our men did the same,” staff sergeant Clement Barker from Ipswich wrote in a letter to his brother. “Then a few of our men went out and brought the dead in and buried them and the next thing happened a football kicked out of our Trenches and Germans and English played football.” German forces also chronicled the event. “This developed into a regulation football match with caps casually laid down as goals,” records the official war history of the German Army’s 133rd Saxon Regiment.

Today, a simple monument placed by the UEFA (Union of European Football Associations) denotes how the sport can bring people together: “To all those who experienced the ‘Small Peace’ in the ‘Great War’.”

But come hours when, ‘mid the stench

And horror of a world at War,

You lose in sleep the world of trench,

And live as you once lived before…

Fades the vision with a sigh,

Waking you to War and dirt.

Alec wrote several poems while on the front lines. These stanzas refer to the first mass use of chemical weapons in modern warfare, when German forces launched a poison-gas attack at the Second Battle of Ypres in 1915.

A half-timbered chateau set by a pond houses the Memorial Museum Passchendaele, which presents the story of the namesake battle. Casualties were massive—245,000 British, 215,000 German—for a territorial gain of a mere five miles.

At the museum, I’m moved by displays of early gas masks, the design an optimistic mishmash of canvas and what looks like a vacuum-cleaner hose fastened to a soup can as a respirator. I wonder if their owners lived or died.

Another section of the museum holds the Dugout Experience, where re-creations of German and British trenches show the dank, claustrophobic conditions where soldiers lived for four years.

“The result of this great sacrifice? Murder, insensate strife, hatred, the casting off of all the guiding ropes of God, and taking the world into our puny hands, to destroy all that was good…”

A pretty hilltop town, Mons is best known for its UNESCO-heritage Doudou festival, with the reliquary of 7th-century St. Waltrude borne through the streets on a horse-drawn golden chariot. Mons is also where British forces suffered their first World War I death (August 21, 1914) and also their last (a Canadian soldier killed November 11, 1918, two minutes before the armistice began).

But “war is more than a military affair,” according to Guillaume Blondeau, curator of the Mons Memorial Museum, which opened in 2015. Set in a renovated 19th-century brick building along a stream, it honors both soldiers and residents of this region that was occupied by Germany in both World War I and World War II. Small, personal items touch the spirit the most: copper cooking pots, lucky charms carried by soldiers, and a crucifix fashioned from a gun cartridge and a pencil.

Perhaps the most bizarre artifact is the proclamation issued in the autumn of 1914 by German General Otto von Emmich. It reads like someone declining an invitation to a ball: “To the Belgian People—It is with my greatest regret that German troops find themselves compelled to cross the Belgian border.” The document promises that Belgians would have nothing to suffer from the horrors of war and that soldiers would prove themselves the best of friends.

“Bad luck. I’ve been hit in the left hand by a piece of trench mortar.”

Written in a wavering hand, that’s the final page of Alec’s war diary.

At the beginning of the journal, he placed instructions that it be sent to his best friends back in London “if found.” Meaning if he were killed.

However, this story has a happy ending. To recuperate from his wound, Alec is sent back to England—where he finally meets the Irish girl with whom he had exchanged letters. Patricia’s autobiography recounts that first face-to-face meeting at Paddington Station:

“When I… saw him standing on the platform looking for somebody, he was so good-looking that I was scared to speak to him. But I said, ‘Are you Alec Saxton?’ And he allowed as how he was… He had his arm in a sling, which added to his glamour.”

Alec, Patricia and their family moved to the United States in 1919. He spent most of his career as a systems manager at Remington Rand (which today has morphed into Unisys). Patricia raised their three daughters and became active in community life in Monroe, Connecticut, starting the local chapter of the League of Women Voters and running—unsuccessfully—for the state legislature.

My husband, Peter, knew them as “Grumpy” and “Grummy,” kindly grey-haired grandparents who helped him pick blueberries for morning pancakes.

I, who met them only through their words, recognize them as the impetuous 20-year-olds who leaped into love amid death and destruction.

Alec and Patricia were married for 56 years.

History comes alive while visiting battlefields and other military memorials. People learn not just about heroes and evildoers, but also the ordinary soldiers who struggled to survive.

Military tourism is an important travel segment in Belgium. Located between France and Germany (formerly Prussia) with their territorial ambitions, the country has witnessed a grim All-Star roster of battles over the centuries.

The most famous clash was also the briefest: Waterloo (1815), at which British forces under Arthur Wellesley (later made Duke of Wellington) defeated Napoleon. The fighting lasted about nine hours. In World War II, Belgium was setting for the Battle of the Bulge, the last major German offensive on the Western Front.

For information about Belgium: About Wallonia: belgium-tourism.be; About Flanders: visitflanders.com

Plugstreet 14-18 Experience [plugstreet1418.be/en]: Located near Ypres, this museum features interactive exhibits about both military and civilian life during the Great War.Mons Memorial Museum [monsmemorialmuseum.mons.be]: Recounts the sufferings of this town that was occupied by the Germans in both World War I and World War II.

Memorial Museum Passchendaele [passchendaele.be]: Exhibits provides an overview of the five battles of Ypres during World War I, along with life in the trenches.

Waterloo Memorial 1815 [waterloo1815.be]: A multimedia museum and the Lion’s Mound commemorate the decisive battle. Each June, people come from around the world to re-enact the military encampments, with historical costumes, artillery demonstrations, and cavalry charges.

Pat and Alec at their 50th: Courier / Decker

For more travel articles on the wide range of bucket list adventures – see our list of travel articles and key words – https://boomersbucketlisttravel.com/travel-articles/

10 Places in France to Add to Your Travel Bucket List

Venice to Mantua - A Bike and Barge Adventure in Italy