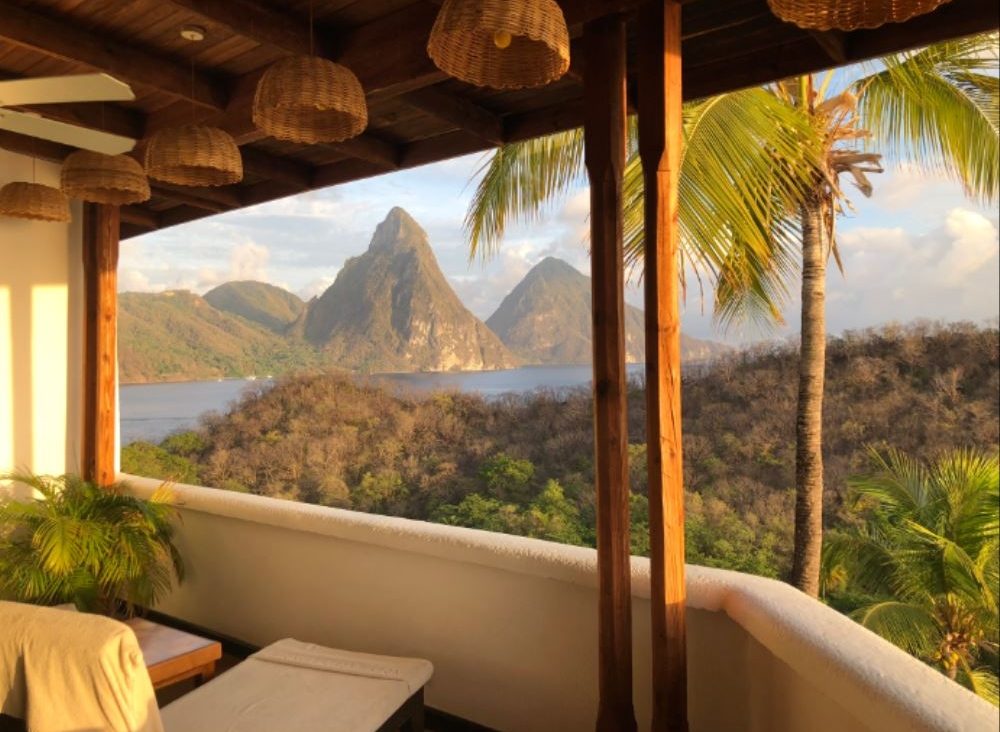 My husband said, “where would you like to spend your 75th Birthday?” How nice! I’ve been a world traveler all my life and lived in Europe and Asia as well as in the States – so being offered a choice was delectable and enticing. Wine in Italy – Ayurveda in India – Sailing in Turkey? A return to St. Lucia? That was it! As avid scuba divers, my husband and I have dived around the world. St. Lucia has been a destination for us that combined tropical luxury, fine food, great diving and wonderful people. A return to Anse Chastanet Resort was an immediate YES!

Flying from San Francisco to St. Lucia is either a red-eye or a US airport hotel stay over en-route. Flying to resorts in the Caribbean we have always chosen the hotel stay over. As we did this time for St. Lucia. The one-hour drive from the St. Lucia airport to the town of Sofriere and up the hills to Anse Chastanet was beautiful and arriving fresh truly made a difference. We meandered up along the coast with breathtaking views of the island’s famous Pitons, tropical foliage and passing the kids in their school uniforms. We were already slowing down and the reggae music playing in the hotel’s airport transfer set the tone.

Anse Chastanet is set on the side of a mountain with direct views to the Pitons on one side and the open Caribbean Sea on the other. The resort is truly isolated and private with its own 500 acre plantation and mountain biking course down the coast. A honeymoon paradise – yes – a bucket list 75th – of course.

Our room was out of a travel brochure. In fact, one day while we were down on the beach, the manager asked if it was OK if a magazine crew took photos of our room. That was a compliment! We had a 180 degree view with the Pitons and the sea. This was enhanced in that there are no windows in most of the rooms at Anse Chastanet. The resort’s owner and architect Nick Troubetzkoy designed each individual room with a passion for nature. On our first visit – we had a tree growing up through the floor of our shower! This time our bed was a four poster – with mosquito netting and a fan inside the top netting. No mosquito net claustrophobia at all.

Never saw a TV – there was adequate internet connection and we were provided with a personal cell phone to connect with the central switchboard. Making a scuba reservation or needing an extra bottle of water was just a click away.

Our “routine” was sleeping until 8:30 or so (the birds sang us awake earlier – but we prevailed) and then down to the Treehouse Restaurant for breakfast. Tropical fruits – juices and energy drinks – an array of breaded delights – smoked salmon – and veggies were available as a buffet or we could order from an a la carte menu. On my birthday – I was surprised with a champagne mimosa.

After breakfast we headed down to the dive center for the 10:30 morning dive. There was an 8:30 dive as well, but our West Coast sleep patterns would not allow it. A good excuse!

A few mornings we skipped the dive and lounged on the beach in ultimate creature comfort. Creature comfort and service included a fellow coming by in the afternoon with a choice of facial spray of lemon or eucalyptus mist. That was in addition to the late afternoon ice pop delivery. A staff member was always just a wave away if I wanted something to eat or drink.

On my birthday my husband treated me to the spa treatment of my choice at Kai Belte Spa. I chose the Ayurvedic “Bindi” Herbal Body Treatment with herbal infused oils, and a botanical body mask to “cleanse, detoxify and nourish”. Wow. Later in the week I returned for a more traditional Deep Tissue Massage. Got the kinks out from my “stressful” existence.

The scuba diving was incredible! Even more vibrant than my previous visit several years ago.  Jay, the manager of Scuba St. Lucia, explained that as the water temperature of St. Lucia does not vary that much during the year – the corals have not been subject to the bleaching observed in other sites in the Caribbean where temperature ranges have been more severe. The entire area around Anse Chastanet is part of a larger marine reserve that was established in 1995. The colors and abundant fish life were incredible!

I returned to some of my favorite sites: Superman’s Flight – a drift dive in the shadow of the Petit Piton mountain – a backdrop for the film Superman II. The current was just right to “fly” over the rainbow hues of the wall at 50 feet below the surface. Aptly named – Coral Gardens was as brilliant as ever with needle fish, peacock flounders, puffer fish and an occasional free-swimming spotted moray vying for attention.

On the site Fairyland our eagle-eyed dive master Errol drew our attention to an incredible miniature sea horse. I would have gone past it if he had not signaled. My favorite sea creature is the nudibranch, a beautiful genus of sea slug whose colorful bodies have been described as “designed by Picasso on amphetamines”. There are hundreds of colorful variations and I got a glimpse of the “lettuce” variety on a few sites – subtle shades of green and beige with a lacy body.

On Turtle Reef – named for the shape of the reef rather than finding turtles there – we saw an octopus out of its protective hole and a frog fish.

I could go on – as diving is my passion – but to summarize – I saw a turtle almost the size of a Volkswagen bug, lots of parrot fish, Queen and French Angel fish, several barracuda, a slipper lobster (rare), crabs, regular lobsters and one lonely squid.

Most afternoons I went out on the 2 PM afternoon dive after a light lunch at the beachfront Trou au Diable restaurant. I liked the afternoon dives as the angle of the sun was different from the morning dive and the colors took on slightly sharper hues. The dive boat always returned with enough time to shower and return to Trou au Diable for afternoon tea (done the English way with scones and more goodies) or a return to the chaise lounges on the beach to continue reading the mystery novel I found in the resort library.

Back up to our room for more relaxation before dinner. As our room was at the top of the hill – it was 420 steps from the beach to our piece of paradise. Good exercise – my Apple watch liked my activity – but a few times I used my resort cell phone and got a shuttle ride up to the top.

Now for dinner. Exceptional. Each evening we got down to the Treehouse Restaurant early so we could experience the sunset while dining. Four courses or ala carte. We couldn’t help ourselves, so we did the four courses each night. We were on a MAP (Modified American Plan with breakfast and dinner included in the cost of our room) so the choice was easy. I have to admit that I saved each night’s menu so I could brag about the cuisine when I got back home – a Northern California “foodie”.

Mentioning seven dinners with four courses each would take up too much space – so I’ll have to select a few. Each dish was flavored with local herbs and spices, the fish was freshly caught and most of the vegetables and salads were from the resort’s organic gardens. Bread and deserts were baked on the premises and each meal we were introduced to a different butter and tapenade. The wines were excellent and reasonably priced. Wine Spectator lists the Treehouse Restaurant with an award of excellence for its wines list.  This sounds like an ad – but I was just so impressed with our meals and the service that I need to mention my culinary delights!

Ending with the taste of the birthday cake on my palate is a fine way to end this recollection of my 75th Birthday Wish. For an 80th – lets see what that brings!

For more travel articles on the wide range of bucket list adventures – see our list of travel and boomer articles and key words – https://boomersbucketlisttravel.com/travel-articles/

Cruising the Turkish Coastline on a Luxury Yacht