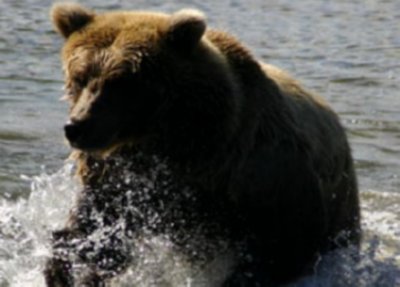 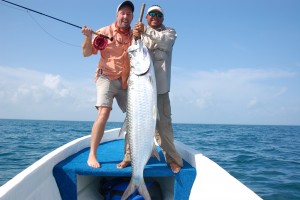 Like father, like son — Andy Alpine and his son Galen share a passionate appreciation of the outdoors. An especially memorable adventure was to Alaska’s Kenai Peninsula and Lake Clark National Park. After the trip, each recounted his experiences.

“Dad, you really are a good fisherman!”

Music to my ears — my son (still teenaged at the time) actually giving me a compliment. The locale for this momentous event was on the Kenai River in Central Alaska. On our last few fishing expeditions in the California Sierras, I had returned empty-handed or with a lot less fish than expected. In Alaska I was feeling like a pro.

Known as the best salmon river in Alaska — which is saying a lot — the Kenai churns with runs of King, Sockeye and Silver (Coho) throughout the summer. Rainbow and Dolly Varden trout also abound. Each day I was catching my limit.

It was late August, and Galen and I were visiting Great Alaska Fish Camp & Safaris to experience the magnificence of Alaska and get in some good fishing.

Lawrence John, the owner of Great Alaska (and the 4:30 A.M. wake-up master with steaming cups of coffee!), had arranged for us to sample Alaska’s variety. Our “Wilderness Package” included a pontoon raft excursion down the Kenai, two days at a tented wilderness camp on Sucker Lake, three days fishing on the Kenai, and two days at the Lake Clark Bear Camp.

Each day we encountered majestic vistas and nature’s wonders. Our first night at the tented camp, Galen and I took inflatable kayaks out on the lake after dinner, paddling until 10:30 P.M. in the long, lingering daylight. We watched a full moon rise and glint on the tranquil water. The glasslike surface and the quiet was only broken by our strokes and by the plaintive calls of loons that would glide onto the water just yards from our boats.

We spent our second day kayaking lakes in the Kenai National Wildlife Refuge. It was thrilling to paddle through immense fields of water lilies and hear the shrill cry of a bald eagle as it circled above. We even caught a few fish casting from the kayaks. That evening we were treated to a display of the Northern Lights, which looked like bouncing, brilliant clouds. Chasing through the forest, we followed the formations across the sky. 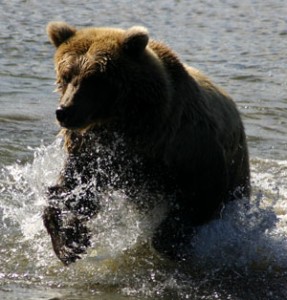 After two days of kayaking and fishing from our inflatables, we were ready to go after the “big ones,” and moved to Great Alaska’s main lodge at the confluence of the Kenai and Moose rivers.

“Breathtaking” is the only way to describe the view of the Kenai Mountains from the expansive deck that encircles the lodge. Suspended on a ridge overlooking the two rivers, the deck was the meeting place for anglers to discuss the conquests of the day and lament the “ones that got away.”

The “beach” in front of the lodge entertained those who wanted to fish until dark, but the serious angling started after the infamous 4:30 A.M. wake-up call and the 5 A.M. breakfast. The guests left in groups of four with guides to fish for either silver salmon or trout.

The first morning, our guide was Kent Johns (the owner’s son), who took us near the mouth of the river where the silvers had been running the day before. He immediately advised us to “keep the tip of the rod up” and “only reel in after you have pulled up.”

Once the salmon came through, it was like a fish stampede. When a silver takes the lure and runs, the line literally screams as it leaves the reel. There was one moment when both Galen and I had fish on the line at the same time. Adrenaline flowed as we kept the tips of our rods up to maintain tension, while trying to keep the lines from entangling the fish as they jumped in an attempt to spit the hook and escape.

By 10:30 A.M., we had caught our limit of two silvers per person while releasing more than fifty pink or humpback salmon. On our way back to the lodge several bald eagles bade us farewell — I sensed that they were happy to have the river all to themselves for afternoon fishing.

Our afternoon was R & R on the deck watching the light play on the distant mountains. After a sumptuous dinner of pesto shrimp and pasta we headed down to the beach where Galen caught and released a silver and I did the same with a beautiful rainbow trout.

For me, one of the highlights of the trip was the day spent fishing from a drift boat with Galen, two guys from Lawrence John’s Costa Rica Jungle Tarpon Lodge, and our guide Russ Millstein. A drift boat is just that: no motor, just an expert guide who steers the boat with two oars and lots of muscle. As Russ did the steering, he and rest of us fished as the boat floated downstream.

We entered the river at Skilak Lake as the sun came up, turning the clouds to pink cotton candy. Vistas were awesome, with the sun rising beyond the virga (sheets of rain) in the distance. Combined with the panorama of snowy summits, the scenery brought Galen to exclaim, “This is the real Alaska — thanks, Dad!”

Early on, the five of us decided to catch and release the fish so that we wouldn’t hit our limit too soon. We wanted to fish the entire river as the boat headed back towards the lodge.

To our surprise, we actually went through some periods without even a bite. But it didn’t matter as we enjoyed the quiet rush of the Kenai and the wildlife — eagles, loons, beavers, muskrats and even minks — that we observed along the shore. We also were treated to a short stretch of Class 3-plus rapids near Cooper’s Landing.

Drifting offered the challenge of hooking and landing fish in varied environments, and we had no trouble catching our limit before we got to the lodge. Luckily we returned just moments ahead of a massive thunderstorm that we got to appreciate from the comfort of our cozy rooms.

After one week, Galen and I were so enthralled with the Alaskan adventure that we considered hiding in our cabins, hoping to be left behind for a few more days.

Love, life, religion. All these thoughts surged through my mind as I stepped onto the landing strip where our prop plane had just touched down. This “airport” was actually a five-mile-long beach that skirted a picturesque bay. I could not have imagined a more stunning and untouched place on earth — and I was lucky enough to be standing in the middle of it.

Huge, snowcapped mountains loomed around a surreal-blue inlet. In the distance I could see a speck — a brown bear meandering through the grassy plains in its never-ending search for food.

Although my dad and I had spent the last week fishing on the Kenai River and exploring the Kenai Peninsula, this is what I had come to Alaska for — the real outdoors. “I never wanted to leave this place,” I remarked to my dad — and we had been at Great Alaska Bear Camp for less than one minute.

At the camp itself, things got even better. After meeting the friendly staff of three, we were led to a viewing platform about 150 yards away. As soon as I looked into my binoculars, I was delighted to see a group of bear cubs — triplets — playing under their mother’s watchful eyes. At one point, I had 18 bears in view.

During our three days and two nights at the camp, we watched bears from various viewing platforms and ate delicious food (but no fish was allowed because of the bears). Mornings were spent casting for silver salmon from the beach in front of the camp.

I have always considered nature my church. If so, this place was my heaven. The peace I felt made me yearn to return before I had even left.

For more information about the programs offered by Great Alaska Fish Camp & Safaris, or to make reservations, call 800–544–2261 . See their Website at www.greatalaska.com.