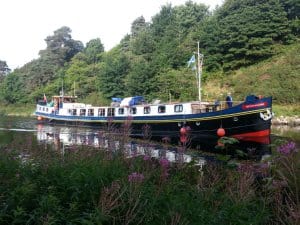 Imagine your favorite boutique hotel with attentive staff, gourmet cuisine, and luxurious accommodations. Now picture yourself elegantly gliding through the misty Scottish Highlands taking in the spectacular scenery, ancient history, and charming folklore while leisurely cruising across legendary Loch Ness and through the Caledonian Canal.

Then you will begin to understand the hotel barging experience aboard European Waterways 117 foot floating hotel barge Scottish Highlander.

This retrofitted 1930’s era grain barge gives the impression of a Scottish Country home when you first step onboard for six nights of pure pampered pleasure. Its subtle use of tartan furnishings and its fully stocked open bar saloon featuring some of Scotland’s best Single Malt Whiskies instantly immerses you in the culture.

The Scottish Highlander holds a maximum of eight passengers in three twin/double staterooms and a larger twin/double suite at the bow of the boat ensuring an intimate atmosphere for all. Each cabin includes private bathrooms, showers, and daily housekeeping service.

I arrived early to find Captain Dan Clark busily cleaning the glass portholes and later was greeted by Hostess Inga Kakite with a glass of sparkling Prince William champagne. My fellow passengers soon joined me at the opening reception and included an Australian couple from Melbourne, an American couple from Chicago, and an English couple and their eight year old daughter.

We were introduced to the remaining members of the four person crew which included Master Chef Sasha Tkacova and Tour Director Barry Paterson and soon sat down to what would be the first of many memorable dinners.

All dinners and lunches include full wine service- always offering a choice of fine red and whites. Dessert the first night was Cranachan, another local favorite made from roasted oats and granola with double cream topped with fresh raspberries.

In the European tradition, a variety of local cheeses are served each evening with dessert. The first night featured my favorite, an Isle of Kintyre mature cheddar with claret, along with mature Stilton.

Captain Clark, an experienced bargemaster of nine years, gave us an overview of the sixty mile trip ahead through fourteen locks and across Loch Lochy, Loch Oich, and Loch Ness. He warmly welcomed us to join him in the wheelhouse along the way for those of us who wanted to learn more about the boat’s operations.

In addition, each day our local Tour Director would be leading us on included excursions on shore to explore historic castles, gardens, battlefields, and even an authentic whisky distillery.

The next morning we boarded our minivan after a hearty breakfast and visited the infamous village of Glencoe where the McDonalds were slaughtered in their beds in 1692 by the English after being betrayed by the Campbell clan. On the way back to the boat we got a close-up look at old Inverlochy Castle in Fort William- a Scottish rarity because it never changed shape or size.

It was a typical Highlands summer day with the temperatures in the 60’s, partly cloudy, and intermittent showers with a light jacket or sweater being comfortable on the sundeck. The Scottish Highlander cruises from late March through October with an average high of 65 degrees Fahrenheit during July and August. However, we experienced much sunnier and warmer conditions later in the cruise so come prepared for a variety of weather.

The Captain’s log on the first day read: “ Left Banavie and cruised along the Canal where we passed Moy Bridge, the last original bridge on the Canal. After that we entered Garlochy Lock that lifted us up about 10 feet. Afterwards, we cruised Loch Lochy and locked up through Laggan Locks”.

Just remember Loch is the Gaelic word for Lake and Locks are the manmade chambers on the canal for raising and lowering boats between stretches of water of different levels. LOL (Laugh Out Loud)!

After our 20 mile journey, as we slowly raised up in the lock and prepared to moor for the night, we were surprised to hear the distinctive sound of the bagpipes. As if it were a Broadway stage, the boat dramatically elevated in the lock to see a lone piper in full regalia marching back and forth on the towpath.

We all stood spellbound transformed back in time as he played just for us in this remote section of the Great Glen. I can only describe it as an almost spiritual experience.

That evening we dined on appetizers of Scallops, Black Pudding, Quail eggs and Curried Butterbean Sauce. The entrée was Rack of Lamb on Scotch broth risotto followed by baked Vanilla Cheesecake with Scottish Glayva berries along with Isle of Kintyre Applesmoke Cheddar and Dunsyre Blue cheeses.

I woke up the next morning to sheep looking through my porthole as we began our ten mile trip to Fort Augustus on the southern shore of Loch Ness.

Needing some exercise I joined my fellow travelers in a leisurely walk along the canal towpath where we soon caught the boat at the Kytra Lock. The Scottish Highlander also provides bicycles if you prefer to ride.

As I approached Fort Augustus on foot I noticed a lovely field of purple heather across the canal and was intrigued to see it was part of a golf course complete with a herd of sheep munching on the greens. It was the Fort Augustus Golf Club and I vowed to tee it up the following day as we locked down to Loch Ness.

The next morning as I hacked it out of the heather and gorse, I smiled knowing I was experiencing an authentic round of golf in the country of its origin.

European Waterways can arrange golf or other themed cruises at customer request including wine appreciation, cycling, walking/hiking, or even tandem barge cruises for larger groups. In fact, half their cruises are exclusively chartered for families, friends, or corporate outings.

Excursions followed to Urquhart Castle along Loch Ness and to Eilean Donan Castle near the Isle of Skye along with Cawdor Castle and its exquisite gardens and the Culloden Battlefield where Bonnie Prince Charlie was defeated by the British in 1746 ending the last Scottish rebellion.

The final day featured a tour and tasting at the Glen Ord Whisky Distillery and a surprise visit to an ancient Pictish (Ancient Scots) stone mound burial ground called Clava Cairns before the Captain’s Farewell Dinner that night at Muirtown Wharf in Inverness.

As we gathered one last time at the dinner table for a meal of Haggis, Neeps and Tatties (National Dish of Scotland) and a delicious Aberdeen Angus Beef Fillet we exchanged addresses with our fellow travelers and planned to travel again on another hotel barge.

Overall, the cruise had far exceeded my expectations. It had given me a relaxed, informed, and elegant trip through the Highlands along with impeccable service and a gourmet sampling of local cuisine.

Prices for a six night cruise aboard the 8 passenger Scottish Highlander are from $3850 per person in a twin/double en suite cabin, including all meals, wines, an open bar, excursions and local transfers.

The Region:Luxury Canal Cruises in Scotland – The Caledonian Canal, Loch Ness & the Highlands

European Waterways also offers cruises in France, Holland, Italy, Ireland, England, Belgium, Germany, and Luxemburg. For complete information visit their website at www.gobarging.com or call toll free from the US at 1-877-879-8808.

Sicily - An Offer You Can't Refuse!