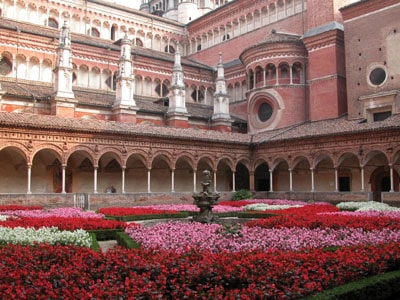 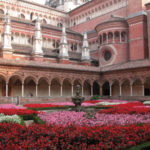 Twenty-three of us sat outside our country hotel around a large table, some sipping wine, as the September sun reflected off the yellowing rice fields that surrounded us. As pink clouds floated above our heads, the long, afternoon shadows accentuated the architectural splendor of the Carthusian Monastery of Pavia (Certosa di Pavia), which also seemed to hover above the golden waves of rice.

A group of people who had never met before, we were discussing what had brought us to Italy. Soon — after just one week of bicycling together — we would no longer be strangers.

We had all signed up for “Culture and Landscapes of Italy,” a seven-day bicycling journey through the Po Valley in Northern Italy. The program was run by International Bicycle Tours, a tour operator that specializes in European bicycle tours that accommodate adults with a wide range of bicycling expertise.

All of us (with one exception) were over 60 years of age and were prepared to bicycle up to 40 miles a day for a week. Since I had turned 60 just a few months before, I felt right at home. In addition to our age, we shared the desire to mix physical activity with cultural stimulation.

Known as the main region for Italy’s famous Arborio rice —the variety used for risotto — the Po Valley was mercifully flat. And although we had all brought Goretex apparel in case of rain or wind, we needed it only for a short period on one afternoon. The rest of the time we enjoyed excellent weather during our week of exploring.

The big difference I noticed bicycling in a group of fit, enthusiastic 60-plusers: nobody competed to see who rode the fastest or whose outfit was the most colorful. We all rode at our own pace and no one ever gri-maced if one person arrived at a destination a bit later than another.

International Bicycle Tours planned all the details of our travels well. For example, they had an ingenious system of stationing a group member at each designated turn on the route, and they had a “sweep” who always rode last to make sure that no one got lost. This method eliminated the constant need to follow a map and permitted all of us to go at our own pace.

In Italy automobile drivers are used to bicyclists since — most likely — they ride bikes themselves some time during each week. Italians use bicycles as a means of transportation as well as a form of exercise and play. We were forever waving to posses of cyclists who were zooming past us on their training runs as well as housewives returning home from the market. This feeling of relaxation and belonging added to our overall touring experience.

The week brought many unique moments. On the evening of our arrival we went on “test drives” on our bikes, and I was immediately taken with the smells of the rice fields. Cycling at 10 miles per hour in the open air helped awaken all my senses.

Our itinerary began with a quiet private visit to the Carthusian Monastery of Pavia. Having taken literally centuries to build and incorporating the work of 250 artists, it is virtually a museum in itself. We attended Mass in a small chapel on Sunday evening and met some of the monks who continue to produce healing herbs and lotions that are well known throughout Italy.

Most mornings began with a lecture on some cultural aspect of what we would be seeing that day. Then we would pedal off through the rice fields and other agricultural landscapes. From greens to shades of yellow and brown — the colors varied as we passed crops in different stages of development.

One very beautiful morning we bicycled through Parco de Ticino Regional Park, which had one of the only true uphill climbs the entire week. The reward: an invigorating downhill coast as we crossed over the Ticino River on a “moving bridge” (actually a long bridge floating on pontoons!).

Vigevano with its Piazza Ducale served up a feast of Renaissance architecture, including the Sforzesco castle and Donato Bramante’s “filaretiana-style” tower completed at the end of the 15th century. Most of all, I was impressed with the massive stable that housed 50 horses. A fine example of military architecture, it demonstrated the importance of horses to the armies of the time. Each mount had its own handler and each handler had his own apartment above the stable.

The covered walkways and well-preserved castle housed soldiers from various countries during Italy’s warring history. It was not until 1968 that the last soldiers left this fine citadel built by the Sforza family.

Man (and woman) cannot live on exercise and culture alone, and so we ate lavishly. My favorite discovery was Bresaola from the Valtellina area of Lombardy. A lean beef salami, it contains less than 10% fat. Coming from young cows 2 to 4 years old, the meat is cured in a brine solution of pepper, bay leaves, cinnamon and cloves for 10 to 15 days. It is then drained and pressed into a shape much larger than traditional pork salamis.

After drying in caves in the foothills of the Alps for up to one year, it is served very thinly sliced. Presented with rucola (arugula) and Parmesan cheese, it quickly became my lunch of choice.

The cultural high point of the journey through the Po Valley was the city of Cremona, where the Piazza del Comune showcased Gothic, Romanesque and Renaissance architecture. In addition to having a beautiful town hall and cathedral, Cremona is known as the home of Antonio Stradivari — and there-fore the center of violin making throughout the centuries.

We had the privilege of visiting a current craftsman of violins and learned about the painstakingly precise art of creating a worthy instrument. The violin-maker, Philippe Devan-neaux, told us of the local expression among violinmakers — “While there is still wood, there is still hope.” Constant chiseling of the wood helps perfect the final product.

Housed in the Renaissance-style Palazzo Comunale (City Hall), the Hall of Violins displayed an Andrea Amati violin — one of the first violins ever constructed — part of a group of instruments designed for the court of Charles IX of France in 1566. In addition to the Amati, this violin museum contained instruments of the famous Cremonese School by Antonio Stradivari, both Guiseppe Guarneris, and Enrico Ceruti.

We found out that each instrument must be played every day to maintain its unique acoustic qualities. Our group was treated to a private concert by the curator of the museum playing a violin created by Guiseppe Guarneri (del Gesu). Pinchas Zuckerman, the renowned violinist, used this same instrument for concerts and recordings from 1972 to 1977. The short musical performance almost brought tears to my eyes as one of the finest instruments in the world was lovingly played by a man who knew its magnificence so intimately.

I left the hall spellbound with a renewed appreciation of beauty: of age, of music, of history — and of the chance to share time with people who valued all these experiences too. The music of the Guarneri provided a perfect finale to a week of physical and cultural discoveries. 

For more information on the “Culture and Landscapes of Italy” itinerary and other bicycle tours in Italy, France, Sweden, Germany, Holland and Belgium, contact International Bicycle Tours, Inc. at 860-767-7005 or ibt@sbcglobal.net; or visit their website: www.internationalbicycletours.com.

World War I in Belgium- Of Memorials and Memoirs