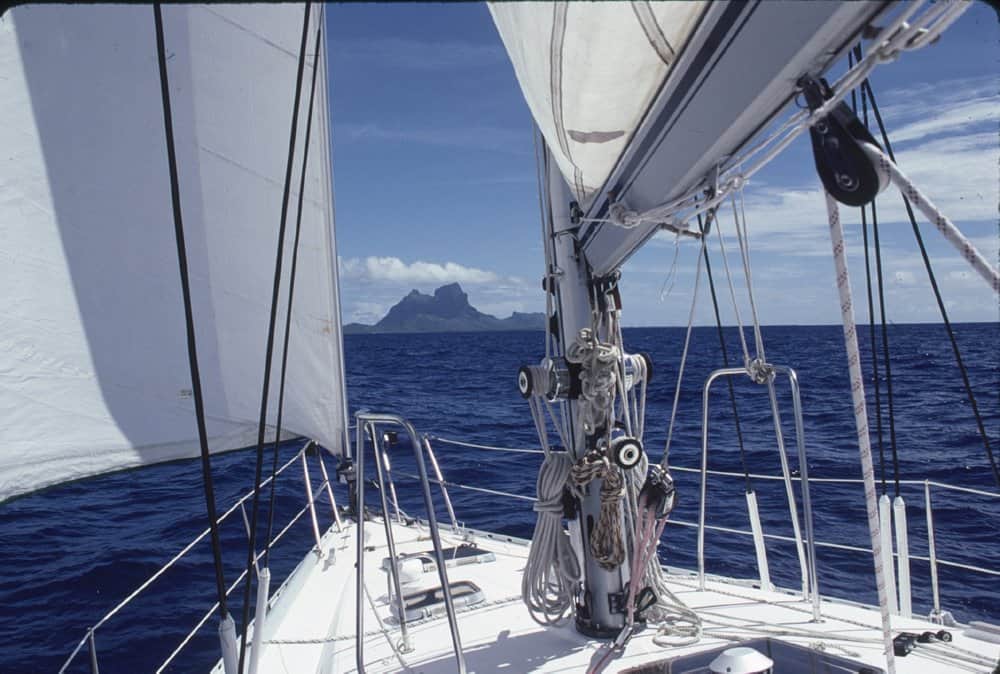 Two slab-sided peaks jut above the tropical sea’s horizon. The silhouettes, blurred by the tradewind haze, push into billowy clouds tinged with a pale green from the emerald slopes. No wonder sailors describe their approach toward shrine-like Bora Bora as a pilgrimage. 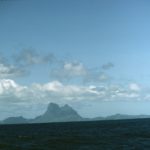 Bora Bora is just one of nearly 120 isles that make up French Polynesia, which is designated as an overseas country connected to France. Many people refer to this tropical paradise as Tahiti, after the largest island in the archipelago. Topography ranges from soaring “high islands” like Bora Bora with dragon-tooth peaks to tiny motus (islets) and coral atolls that ring extravagantly blue lagoons. Located in the Pacific Ocean about 2,500 miles south of Hawaii, the islands are easy to reach, just an eight-hour nonstop flight from Los Angeles.

Our cruising grounds were the Leeward Islands, the westernmost group of the Society Islands, clustered around 17 degrees south latitude and 151 degrees west longitude. The Leewards hold four main islands: Raiatea and Tahaa together in the middle; Huahime 25 miles to the east; and Bora Bora 35 miles to the northwest.

All are island-atolls that erupted from the sea 10 million years ago. They have since partially subsided, leaving surrounding barrier reefs enclosing crystal-clear lagoons ranging from half a mile to two miles wide. 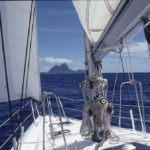 For our 10-day sailing adventure, my four friends and I—longtime sailing buddies who had often chartered together—first flew into Papeete, the capital of French Polynesia and location of the international airport. From the air the island appears as an ancient castle, its keep protected by the ramparts of mottled motu islets, and a barrier reef girdling a turquoise moat.

Air Tahiti connects Papeete to Raiatea, center of French Polynesia’s cruising grounds in the Leeward Islands and home of several yacht charter companies. When we arrived, we were met by the operations manager of Moorings Yacht Charters.  He spoke nonstop of the cruising attractions of Polynesia while driving us to the charter base on Raiatea’s east coast at Marina Apooiti.

Slipping the dock lines of our Jeanneu 44, we sailed out of the shadows of 3,400-foot Mt. Toomani, Raiatea’s highest peak, into the sunny lagoon. A beam reach sped us north past several villages including the island’s commercial center, Uturoa. The shoreline here is flat—no white sand beaches. Coastal hills, carpeted in rich green, give way to sprawling coconut plantations on the upper slopes while higher up wild tropical vegetation clings to soaring peaks. 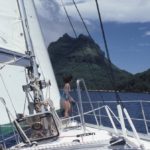 Along the north coast, we carefully navigated a minefield of fringe coral to reach Tahaa, a sister atoll that shares a common reef with Raiatea. The slightest brush with a coral outcrop can be disastrous, but the charts are excellent and the buoys marking the reefs are easy to spot. Marina Iti in Apu Bay near Papai Pass was our night’s anchorage and the departure point for Bora Bora.

Although Papai Pass is well defined with range markers, the following morning we waited out an approaching squall before entering the natural channel through the reefs. Ten minutes later we were out on the open sea where a steady rhythm of soft trades and gentle swells pushed us toward Bora Bora, beckoning on the western horizon.

Most of the 14 island-atolls of the Society Group have several entrances. Raiatea, for example has eight. Bora Bora has only one, and therein lies its charm for those who approach by sea. For thousands of years the driving force of the easterly tradewinds blowing through the twin peaks plus the gullies on the slopes have funneled rainwater runoff into the lagoon exactly in the center of the west coast. Flooding in a narrow band toward the sea, the fresh water inhibited coral growth of the barrier reef, creating the single entry.

As we swung around the south coast the two 2,000-foot peaks lightened and darkened as they threw shadows at each other in a dramatic interplay of light. Once clear of the southwest corner, marked by a 40-foot tower, we reached along the reef, standing clear of the local fishermen trolling precariously on the crests of the giant swells that were crashing upon the coral ramparts.

Inside Teavanui Pass on the glassy lagoon, white-sand motus nestle behind the outer reef, pearls strung together by the thin line of breaking surf. This first glimpse of Bora Bora is little changed from when Captain James Cook landed in 1769. The sense of discovery is not lost today, even by tourists traveling by air who must traverse from the airport landing strip across the island’s lagoon by boat. Eager for a swim and a walk along the gleaming beaches, we anchored at Teveiroa Motu and dived into cool, transparent waters. 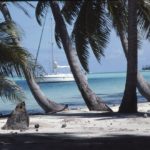 Later that afternoon we sailed to the southwest end of the lagoon where, relaxing at anchor with cans of local Hinano beer in hand, we quietly absorbed the beauty of the setting. Creeping purple shadows from the overhead fractured peaks darkened the aquamarine lagoon waters, then stole upon the white-sand motu beaches to the east of the island. The fragrance of flowers drifted across the waters. A rain squall broke loose from the dark horizon and swept through the lagoon, chased by a glistening rainbow.

The following morning we rode with a dozen other visitors in a small launch to the inner edge of the reef. Equipped with fins and snorkels, we swam through a labyrinth of reef formations to a yellow propylene rope secured between two coral heads—our line of demarcation. We hoped the blackfin reef sharks knew the rules too.

We held tight and waited while a young Tahitian threw several dead fish on the opposite side of the line. Within minutes a five-foot shark snapped them up. More sharks arrived until there were perhaps twenty slicing back and forth, combing the water for remnants. Several times the menacing predators would come within a few feet, fix us with icy stares, and then decide not to challenge the protective powers of our “magic” yellow cord. After they had their fill and departed, sighs of relief bubbled from our snorkels as we scrambled to the launch.

The rest of the day we snorkeled on our own in the shallows of the lagoon. The views were incredible—hundreds of colonies of abstract-patterned fish darting in and out of magnificent coral formations covered with colorful invertebrates.

The two centers for boaters cruising the South Pacific are the Oa Oa Lodge and Bora Bora Yacht Club. The proprietors of Oa Oa welcome visitors with mooring buoys off their docks and a lagoon bar serving hamburgers and hotdogs, making it a magnet for Americans who want a change from French cuisine. Bora Bora Yacht Club has a decidedly French flair with a gourmet restaurant said by locals to be the best on the island. Both locations are mail pick-up points. Messages are left for those yet to arrive, who in turn leave notes for those coming behind.

Most Bora Borans live in Vaitape, a one-street, waterfront collection of pastel clapboard buildings with metal corrugated roofs jumbled along the quay facing the commercial wharf. We quietly observed the Polynesians going about their daily lives, speaking softly and punctuating conversations with gestures and laughter. Many women wore flowers in their hair—garlands, crowns and tiaras of frangipani, bird-of-paradise, hibiscus and the indigenous six-petaled white tiare. Most wore colorful pareus, two-yard bolts of floral cloth wrapped according to the wearer’s taste. 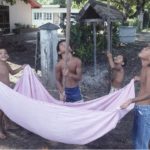 Children played everywhere. One group poked long sticks at fruit high in a tree while others held blankets beneath. When the prize plums fell they were set upon and instantly devoured. Several boys on bicycles pedaled by with freshly caught fish swinging from their handlebars. A grandmother rode past on a bicycle, its baskets full of groceries. With a hibiscus behind one ear and a big smile on her face, she maneuvered patiently among the children and stray dogs. A young mother drove past on a motor scooter—the equivalent of the family Chevy. On the footrest two children were planted among assorted shopping bundles, protected from falling out by her legs.

At a small bay a young woman waded in the water up to her thighs. She was motionless as her eyes searched the water, holding a fishnet on her shoulder to throw at the first glint. We paused briefly to admire her, a living Gauguin canvas, then moved on, embarrassed to have disturbed her silence. 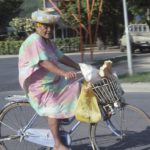 The following days as we moved to different anchorages, we witnessed these scenes many times over. These islanders have the level of leisure desired by the developed nations, yet no wish to take on their degree of industrialization. They were a reminder that paradise still awaits beneath the twin peaks of Bora Bora.

The most direct flights from the US mainland to Tahiti are from Los Angeles International Airport to Papeete on Hawaiian Air and Tahiti Nui. Air Tahiti connects from Papeete to Raiatea, Bora Bora, and the other Leeward Islands.

Three yacht charter companies located on Raiatea a few minutes from the airport offer both bareboat and crewed charters. Although there are a few monohulls in the fleets, most of the yachts are catamarans ranging from 39 to 48 feet. Contact Moorings.com, Sunsail.com or TahitiYachts.com.

Austria - Time passes a different way in the Austrian Alps