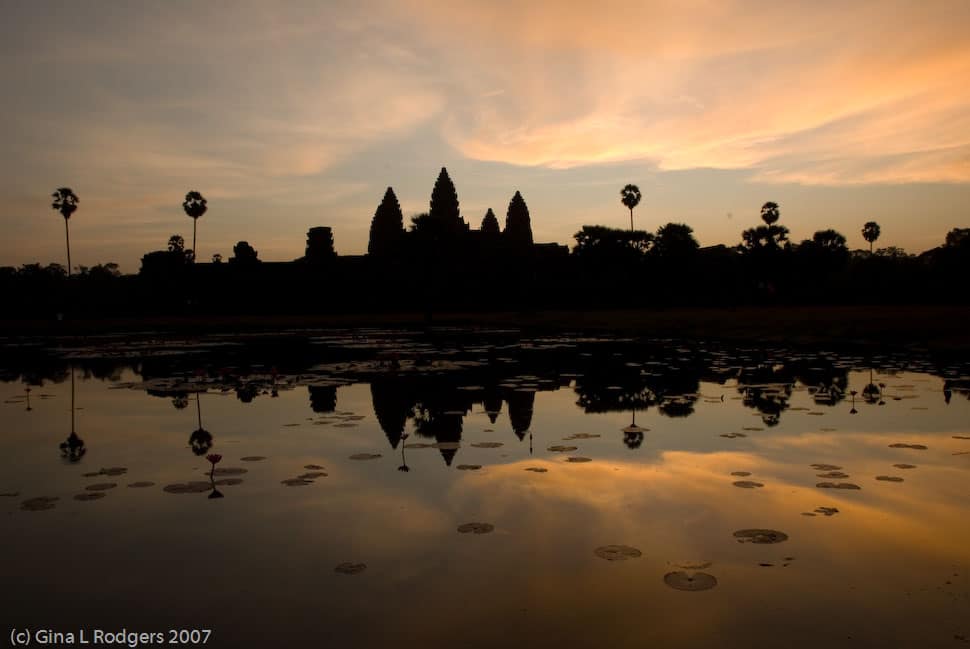 “You look so much younger!” That’s how we were greeted at the Bangkok airport by the woman who had made our hotel arrangements just nine days earlier. Although Cambodia is not usually referred to as a fountain of youth, it had proved one for my wife Daya and myself, rejuvenating us with its relaxed pace and eternal calm.

Best known for the grandeur of its temples, Cambodia lies in the heart of Indochina. Despite its tiny size–about the same dimensions as the state of Oklahoma–the country has maintained the rich culture of its Khmer people, who from the 6th through 15th century A.D. ruled over much of what is now Laos, Thailand, and Vietnam. After two decades of civil war and the communist-inspired “experiment” of the Khmer Rouge, Cambodia is now a stable country, allowing travelers to delve into its unique traditions and treasures.

Angkor Wat would form the focal point of our visit. We flew into the nearest city to the temples, Siem Riep, a sleepy but fast-developing rural town. Our hotel, the new, luxury Sofitel Royal Angkor, was just a ten-minute drive from the main temple.

Before preparing for my trip, I had erroneously thought that Angkor Wat was only one monument. Quite the contrary–although Angkor Wat is the main temple, it also gives its name to a complex encompassing countless structures spread out over 77 square miles. Although some buildings within the area have collapsed into complete ruin, at least 40 structures are in relatively good condition. Although the environs of Angkor Wat itself are pristine and park-like, other parts of the site are pure Indiana Jones jungle, with trees growing through walls and monkeys in the canopy. 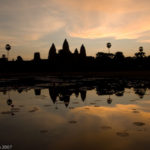 Angkor literally means “city” or “capital,” while wat means “temple.” Construction began in the ninth century, when Jayavarman II proclaimed himself ruler of the unified Khmer state and declared its independence from Indonesia. Over the next 600 years, 39 kings supervised various spurts of temple construction. The most brilliant of the Khmer rulers was Suryavaram II, who reigned from about 1113 to 1150 and built the great temple of Angkor Wat.

Although Angkor remained the capital until 1432, the Khmers began abandoning the site about a century earlier, moving south to Phnom Penh, the present capital. One possible cause for the population shift was the breakdown of the vast irrigation system that had been the foundation of the Angkor economy. Angkor War was finally abandoned shortly after being invaded and sacked by the Thais.

In its art and architecture, Angkor Wat combines Khmer and Hindu motifs. Some carvings pay homage to the Hindu cults of Shiva and Vishnu, while Khmer culture is reflected by the apsaras (celestial nymphs), found in almost every temple at Angkor. Depicted wearing ornate jewelry and clothed in the latest fashion dating back a millennium, they embody the ideal of feminine beauty of the time. Another recurrent design are the nagas (sacred aquatic snakes) which play an important part in Hindu and Buddhist mythology.

Although the ruins of Angkor were reported by many Europeans as early as the 16th century, it was not until the mid-1800s that expeditions supported by the Royal Geographic Society and several French explorations brought the monuments to the attention of the western world. 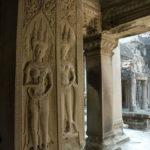 My own exploration began with a visit to the fortified royal city of Angkor Thom. Upon entering the complex through the Naga Gate, one of the five monumental gates of Angkor Thom, I was greeted by the first of the more than 200 “smiling faces” that adorn the temple of the Bayon.

The answer to every tourist’s immediate question–“Why is this man smiling?”–is that he was the king Udayadityavaram II, and that he was in a sublime state. According to Hindu-Brahma belief, the king was the protector of the four directions–and hence, the protector of the world. In facing the four directions, he embodied the four kingly attributes of equanimity, compassion, loving-kindness, and sympathy. If I could embrace those aspects in my life I’d also be smiling!

The best time to visit the main Angkor Wat temple itself is either at sunrise or in the late afternoon. Daya and I approached the monument as the sun was beginning to set, washing the stone walls with an orange-red glow. We moved forward, while the temples stood, stony and eternal, casting their reflections in the surrounding moat.

Designing the temple complex, the Khmer architects had modeled it after Mt. Meru, home of the Indian gods. The five towers symbolize Meru’s five peaks, the enclosed wall represents the mountains at the edge of the world, and the moat, the ocean beyond. We felt awed by the sacredness of the place.

Like a beautiful mountain, Angkor Wat varies from moment to moment. We found a different sense of regal splendor when we visited a few days later to view the half-mile of bas-reliefs around the outer galleries of the temple. Night came quickly as the dark trees and still air gave the ancient monument a timeless veneer. 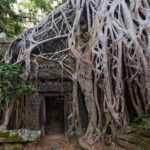 During our stay in the Angkor area, we visited many of the temples and ceremonial monuments. To me, the 12th-century Hindu temple of Banteay Srei was the jewel of all of Angkor. Dedicated to the god Shiva and relatively small, this temple had exquisite filigree relief work depicting male and female divinities. Over 1,000 years old, these artful carvings appeared like more like delicate lace work. The mid-day sun cast intricate minute shadows within each of the three main towers.

Ta Phrom and Preah Khan are two temples that were pretty much left as the 19th-century explorers might have found them, with roots of giant ficus trees snaking around walls and overhangs. As sunlight worked its way through the thick vegetation, it played tricks, making the walls seem to come alive.

A temple to King Jayavarman VII’s father, Preah Khan has some 20 perfectly aligned doorways leading to a central stupa or funerary monument. To reach the heart of the shrine, we had to keep bending lower and lower as we passed through each door–in effect, bowing in reverence as we approached the marker.

We also spent a morning on Tonle Sap Lake. The largest lake in Southeast Asia, it doubles in size during the monsoon season. Nearly 5,000 people live on the lake in floating communities–about 75% of the residents are Cambodians, the rest are Vietnamese. 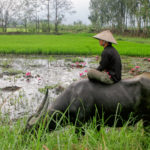 Fishing provides the main source of income–Tonle Sap is one of the richest fish lakes in the world. When the waters recede during the dry season, the fish are forced to concentrate in smaller and smaller areas, making for easy catching . We spent delightful hours floating among the various communities, the quiet sound of the wind and waves occasionally broken by the tinkling bell of the ice-cream delivery man in his small rowboat.

After four days at Angkor Wat, we flew to Phnom Penh, Cambodia’s capital and a city that is starting to recapture its soul after the horrible years under the Khmer Rouge, the Maoist-style communist regime that ruled Cambodia with an iron hand until the mid-1980’s.

Quiet and quaintly French colonial, Phnom Penh has excellent French restaurants, a great central market, and a very interesting National Museum with a fine collection of Khmer art. People still get around in cyclo-rickshaws and spend their evenings strolling along the promenade on the shores of the Mekong River. For us, it provided a good transition from the jungles of Angkor Wat to the beaches of the Cambodian coast.

From Phnom Penh, we drove five hours along an excellent highway to Sihanoukville, a resort town on the Gulf of Thailand. Although not as well-known as the beaches of neighboring Thailand, Cambodia’s strands are picture perfect, with white sands, lots of trees and an occasional small fishing boat motoring across the bright blue waters.

Sitting on the beach one afternoon eating mangoes and pineapples cut with sushi-chef exactness by dark-eyed kids, I though of a phrase from a book I had just completed: “What we need are more moments of lower level ecstasy.” I was having such a moment right there on the beach eating fruit with a bamboo skewer.

Before leaving Sihanoukville, we stopped at the Buddhist temple of Wat Chu Kunhan. Here, we spent half an hour with the head monk who talked to us of his love for his country, read our palms and offered us gifts of small carved Buddhas for our journey. His insight into some of our innermost concerns was truly mind-boggling. I had been worried about a dark spot on my chest as a possible skin cancer and he, without any information from me, immediately addressed the issue. And all this while we drank tea, sat on the highly polished floors and smelled the ever-present aroma of incense. His blessing was a perfect finish of our visit to the land of temples and tranquility.

Over 300 Cambodians are trained as guides to Angkor Wat and offer tours in English, French, German, Japanese and Chinese.

In December 1992 Angkor Wat was included on the UNESCO World Heritage List recognizing it as one of mankind’s most significant cultural sites.

The name Cambodia is derived from the word Kambu-ja, meaning “those born of Kambu,” the mythical founder of the country. It dates back as far as the 10th century.

Cambodia has a tropical monsoon climate, with the wet southwest monsoon occurring between November and April and the dry northeast monsoon the remainder of the year.

Posted In: Angkor WatCambodiaPhnom Penh
Next