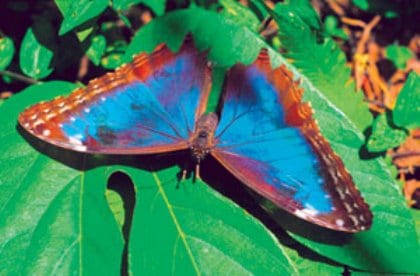 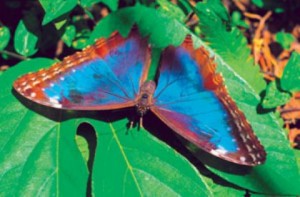 It was that day in Tortuguero, Costa Rica — when, from our small flat-bottomed boat we saw spider and white-throated capuchin monkeys, three species of toucans, iridescent iguanas, “Jesus Christ” lizards that actually walk (or run) on water, Day-Glo butterflies with wingspans as wide as your head, several large caiman, and frogs and birds of every hue — that out of the mist suddenly I heard Jake.

I shivered. The hair on the back of my neck stood up, ancient horrors revived. Jake the Doberman had been my nemesis as a kid. Now I heard his growl, only louder and more werewolfian. Our guide, Ray Hooker, assured me that what I’d heard, then seen, were simply howler monkeys leaping from tree to tree high above us.

It’s a jungle out there! Wet with rain and smelling faintly of sweet decay, we were privileged to be in this fecund country in which five percent of all known species of life on Earth occupy less than 0.003 percent of Earth’s land area. The place is supremely beautiful. No wonder Costa Rica attracts some two million visitors a year, most of them drawn by ecotourism. Like so much of this country, the Costa Rican government fiercely protects Tortuguero Park.

Hooker, who has spent all his life in this remote area whispering its secrets to tourists like me, pointed to a small green heron that catches insects only to drop them into the black water as bait, fishing for bigger game. What a show-off!

Early that morning, as I explored the Caribbean beach behind our comfortable casita, I found tracks of a loggerhead turtle. Apparently, just hours before, she had fulfilled her destiny by returning to the place of her birth some 30 years earlier, struggling ashore to dig a hole in which to lay 100 or so eggs — one of which may be lucky enough to return here in another 30 years — continuing this 160-million-year cycle of life.

Such sightings are uncommon at this point in June, but from the middle of August until mid-September, I can almost guarantee that you will see this miracle unfold as the Atlantic green sea turtles return here each year. Even the rare Costa Rican jaguar is sometimes seen swimming across the river for a breakfast omelet.

Our Caravan Tour actually began two days before at the luxurious San Jose Palacio, an “all-inclusive” hotel where drinks, meals, tips and extra towels are all included. Since then, we had toured the capital city, visited the cloud-forest with its steam-belching mile-wide Poas Volcano crater (one of seven active in the country), seen the cascading waterfalls of Braulio Carrillo Park, taken a guided hike through yet another rainforest, and slipped through a forest canopy on an aerial tram.

There are 43 of us on this tour. Mostly professionals — doctors, engineers, some retirees — we’re aged 15 to 82. All are interested in ecology, travel, and nature.

For my wife, Carolyn, and me, this is our first group tour. And I can tell you we weren’t looking forward to getting herded from place to place.

But it wasn’t like that. Our tour guide, Patricia Alfaro, surely one of the most knowledgeable in the world about all things Costa Rican, kept us moving, learning, and laughing without ever feeling “grouped.” As it turned out, when I asked folks at the end of the tour what they liked best, most answered, “The fascinating new friends I made.”

Sicily - An Offer You Can't Refuse!