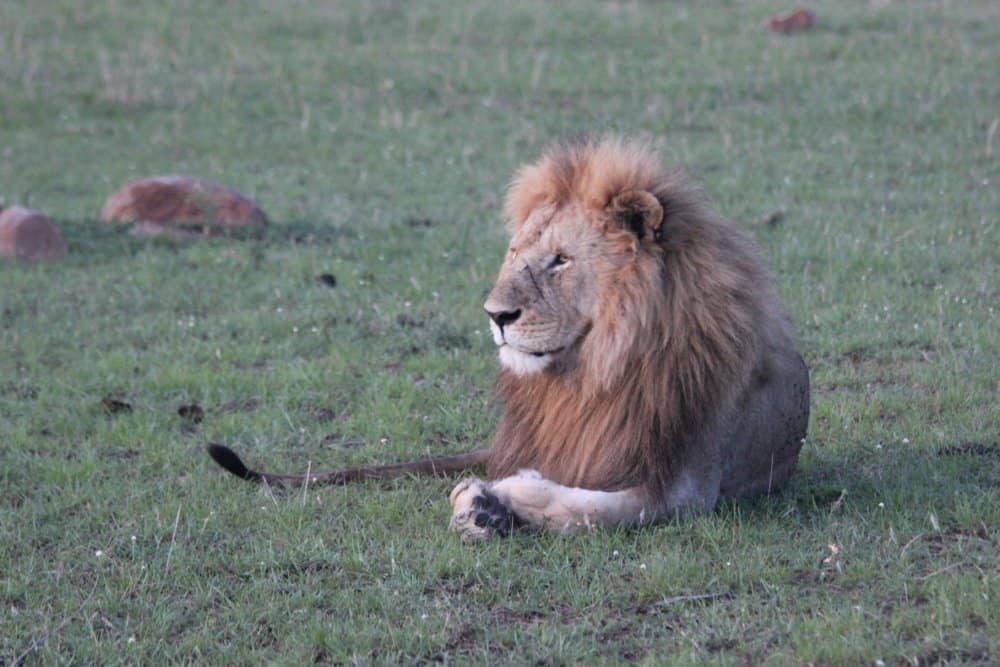 It had truly been a “wild” night.

I had fallen asleep with difficulty because of lingering jetlag. The roaring lions–vociferously nearby–didn’t help either. After I finally dozed off, my rest was interrupted when rambunctious hyenas toppled the wash basin outside my tent. Needless to say, I was not a happy camper when the 6 A.M. wake-up call roused me from my fitful slumber. 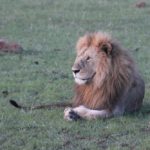 But all was forgiven when just a half mile from our campsite, we spotted five lionesses with their cubs. There was no doubt about it ? I was in Africa.

It was precisely this opportunity for close contact with nature that had attracted me to Tanzania in the first place. East Africa’s largest country, it is famed for the diverse and plentiful wildlife that roams its vast savannas, wetlands, and forests ? sweeping landscapes that typify Africa. Whether it’s cheetah, wildebeest or baboon, there are denser populations here than anywhere else in the world.

While Tanzania provided the ideal location for experiencing the drama of nature, it also gave me a chance to spend time with my brother-in-law, Marty, who joined me on the ten-day safari with African Safari Co & Expeditions. Though most of our safari was based in tented camps, overnights in luxury game lodges helped us combine relaxation and reality. 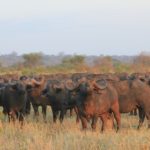 Our safari had begun at Kirumuru, Hoopoe’s fully-equipped tented camp. From here, we continued to Lake Eyasi, where we met the Hadzabe bushmen who would guide us on a hike into the Ngorongoro highlands. Like the Kalahari bushmen of Southern Africa, the Hadzabe are “hunter-gatherers” who lead a completely nomadic lifestyle. A Tribal Education

Traveling with the bushmen, I felt connected to the ancient pulse of Tanzania. On the trek to our campsite on Mount Makarot, the Hadzabe drank only water that they found on leaves or in an occasional rock indentation. When it started to rain, they covered their poison-tipped hunting arrows to prevent the moisture from diluting the poison, a seemingly odd precaution considering they were merely leading tourists on a hike. 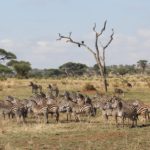 Yet for the Hadzabe, who live from the land just as their ancestors did, alertness is always necessary. Bow and arrows in hand, they remained poised to bring back a zebra or giraffe to their village. When we encountered a beehive in the hollow of an acacia tree, the Hadzabe wanted to stop, smoke out the bees, and take the honey. Though we couldn’t spare the time on our way to camp, we knew that they would return to the nest on their return to Lake Eyasi.

What Goes Up Must Come Down

The Hadzabe weren’t the only ones with ancient ties to the land. The trail we used had been blazed by generations of elephants, which–due to their sheer bulk –choose the most efficient routes for getting up and down a mountain. Likewise, we hikers appreciated their ability to bypass ravines and steep inclines. 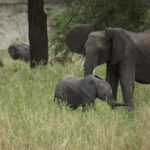 After a day-and-a-half with the Hadzabe, we headed to renowned Ngorongoro Crater for our first actual game-drive. A volcanic crater encompassing 100 square miles and a World Heritage Site, Ngorongoro is a Garden of Eden for big game.

Surrounded by 2,000-foot walls, the vast herds of wildebeest, zebra and gazelles remain here year round instead of embarking on the seasonal migrations like those between the Masai Mara in Kenya and the Serengeti in Tanzania. For safari enthusiasts, any time of year is good to visit Ngorongoro.

Although we had seen large game in the distance on our hike, viewing the game close-up from the Land Rover was a completely different experience. Within our first game drive, we spotted “the Big Five”: lion, leopard, rhino, elephant and hippo.

Within the colossal confines of the crater, the circle of life goes on ? the hunter and the hunted, life and death intermingling in an epic, age-old dance. While we experienced the full spectrum of ostrich mating season, we also witnessed a pride of lions feasting on a freshly killed zebra.

Lions and Tigers and Civets ? Oh My! 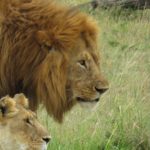 After a fascinating visit to Olduvai Gorge, the site where Drs. Mary and Louis Leakey discovered hominid (early human) remains dating back 1.75 million years, we headed west to Serengeti National Park, located on the border with Kenya.

With its grasslands and see-forever vistas, the Serengeti exemplifies the raw beauty of Africa. On the way to our private campsite near the Makoma Hills, we encountered a cheetah lolling under a tree, and a civet cat slinking through the grass. It had recently rained, so hundreds of Thompson gazelle grazed around our campsite, eating the new shoots of grass.

Once our tents were in place, we headed off for a game drive and were greeted by a large herd of elephants who had been using our campsite as “home base” just a few days before we arrived. 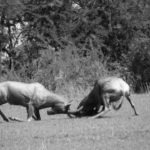 The herd was full of fascinating antics. One young elephant tried to imitate how her mother used her trunk and lips to eat thorny acacia trees. Since there were no acacia around on which to practice, the baby just mimed the technique with an empty mouth. A short while later, she began snorting and making menacing noises at us. The mother immediately shoved the young elephant away with her hind foot and gave it a look as if to say, “Just be quiet and leave the tourists alone.”

Our entire visit to the Serengeti was filled with incredible moments. The next morning, we observed five lions returning from a night of hunting, and followed them to the area near our campsite where they had left their cubs. We counted 14 cubs that immediately jumped up to greet their mothers and then proceeded to romp and play among themselves. Our Land Rover was literally surrounded by a mass of lions sprawled in the grass roaring, moaning, and chattering–a feline “family reunion.”

After three days in the Serengeti, we had to move on, sadly leaving our idyllic camp beneath the spreading acacia tree. Within less than a mile on our drive out, we passed a leopard lounging in a tree, a pride of six lions, a herd of elephants, and 12 giraffe grazing in the shade … a fitting way to say goodbye to the Serengeti. 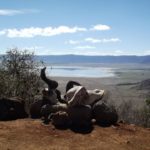 Returning through the Ngorongoro crater, we spent a night on the rim of the crater at the luxurious Sopa Lodge, where we were greeted by sherry on our nightstand, flowers in the shower and hot water bottles to warm our bedsheets. Moonlight reflecting on the lake in the middle of the crater was breathtaking. After our nights in the wild, the stay was a welcome luxury.

Don’t get me wrong–a tented safari doesn’t mean overnighting in a tiny shelter with sleeping bags. Even in the middle of Serengeti National Park or on the shores of Lake Eyasi, our tents were spacious enough for two large and comfortable cots, and our bathroom and shower facilities were what is called “en suite”  attached to the back of our tent. At Kirumuru, deluxe tented safari lodge, we had bathroom facilities, real beds, solar-heated hot-water showers, overhead lights and a covered porch. Not bad for “roughing it.”

Known for its huge herds of elephants, Tarangire National Park was our next destination. We stayed at Tamarind and were fortunate enough to experience a night game drive. 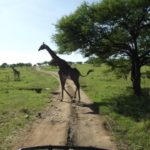 Although our field of vision was limited to what our spotlights could reveal, we were soon observing giraffe, wildebeest, zebra and, of course, the beautiful night sky of Africa. The most unusual sight, however, was the Spring hare, a nocturnal character about 18 inches in length that has big round eyes and jumps on its hind legs like a kangaroo. Surprisingly, the little creature showed no fear of humans.

Tarangire’s outstanding feature is its large and bulbous baobab trees, which can be hundreds of years old and reach 30 feet in diameter. They also provide an excellent habitat for wildlife. On our first drive into the park, our keen-eyed guide Joseph spotted a leopard draped over a baobab branch. We considered ourselves lucky, since leopards are elusive and rarely seen by visitors.

Amazingly, when we returned to the same locale at the end of the day, the leopard was still there, but this time lounging in a neighboring tree. In hope that the leopard would still be there, another safari vehicle followed us the entire afternoon waiting for us to return to the spot.

As we also discovered at Tarangire, size doesn’t always matter. Some of Africa’s most deadly inhabitants are barely noticeable. On the drive, we encountered two poisonous snakes: a black momba (spitting cobra) and a puff adder (viper). We were not in any way threatened by the snakes since we spotted them as they crossed the road in front of our safari vehicle aware but unaffected by our presence. 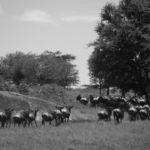 At the end of our last game drive in the Tarangire, Joseph carefully positioned the Land Rover for the perfect photo of the sun setting behind the silhouette of a magnificent baobab tree. I hadn’t asked him to do this, but it was one of many examples of the helpful, professional service that made our entire safari memorable.

On our last morning in Tanzania, we traversed a road filled with locals heading for Saturday market. We watched red-clad Maasai–statuesque, regal–as they made their way toward town, their distinctive poles draped carefully over their shoulders, creating yet another hauntingly beautiful tableau in this diverse land.

From the vast plains of the Serengeti to the majestic peaks of Mt Kilimanjaro, Tanzania remains a land of sheer beauty. In scenes of ancient tribal traditions still practiced, or moments of life and death played out in the wild, Tanzania reflects the essence of Africa.