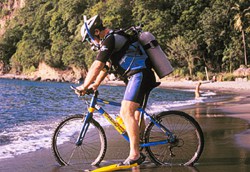 Mountain biking and diving: two of my favorite adventure sports. Whether it’s the perpetual thrill of biking the hills near my home in California, or diving the reefs of the world, I’m passionate about the rush. Recently, I found the best of both worlds on the Caribbean island of St. Lucia.

Located midway between Martinique and St. Vincent towards the southern end of the Caribbean chain, St. Lucia is the sort of fantasy island that travelers dream about —small, lush, intensely tropical. Only 27 miles long and 14 miles wide, the island meets the Atlantic Ocean on the east, and the Caribbean Sea to the west. The best-known landmark is the Pitons: twin summits that soar nearly a half-mile above the sea. In addition to its stunning beaches and reefs ideal for diving, its rainforests offer excellent wildlife viewing, hiking, and in the case of my visit, “jungle biking.”

My wife Daya and I lodged at the Anse Chastanet Resort, a 600-acre property situated on the southwest coast of the island. Its 49 individually-designed rooms are nestled along a jungly slope leading down to the resort’s black-sand beach, with some rooms on the beach itself.

Beauty is everywhere at the resort. From the resort’s open-air terrace, views take in the sparkling Caribbean as well as the summit of Petit Piton. Beams and columns are carved with figures and fruits; paintings by local artists adorn the white walls. Waiters and waitresses are colorfully garbed in traditional-style madras outfits — the number of peaks on the women’s head scarves signify if they are single or married.

Our biking adventures began on the second day of our visit. We hopped on the resort’s water taxi and went around a bend to the resort’s second beach, Anse Mamin. The beach fronts a 600-acre colonial sugar and cocoa plantation also owned by the resort, and the estate is used by its own Bike St. Lucia for jungle biking trips.

Wading ashore, we listened to the hushed break of waves and felt the afternoon sun warming our backs. As we moved inland from the beige and deep blue of the beachfront, we were immediately surrounded by a wall of lush green vegetation, rising hundreds of feet above us on three sides.

The former plantation now offers 10 miles of private jungle biking trails. Run like a ski resort with routes for novice, intermediate and advanced riders (clearly marked as green, yellow and red), the trails follow either already-existing plantation paths or new routes covered with wood chips and mulched palm fronds, leaving the existing vegetation intact. Although all the trails looked like they had been there for years, some were less than a year old.

After a thorough introduction to the trail system and a brief orientation ride, we set off on two of Bike St. Lucia’s Canondale suspension bikes. We were also provided with helmets, trail maps, souvenir water bottles and even special shoes in case our own equipment wasn’t up to snuff.

With the dense vegetation and the surround-sounds of waterfalls, streams and birds, it took a short while before I managed to concentrate on the trail, rather than the scenery. On my first loop, I rode by an incredibly inviting swimming hole to which I later returned, sweat-soaked and invigorated by the biking.

Over the course of the week, I visited Anse Mamin several times to test my skills. Following my trail map and clearly marked “road signs,” I began attempting more adventurous climbs. All trails were single-track, one-way routes, so I never had to worry about a fellow biker swooping down at me, Tarzan-like, from the heights.

While most of the trails are perfectly suitable for a casual mountain biker, hardcore enthusiasts can meet their match on “Tinker’s Trail,” a route I chose to hike instead of bike. Designed by Team Volvo-Cannondale rider Tinker Juarez, the trail winds to the top of a 1,000-foot-high peak. Fit, experienced riders can accomplish the climb in approximately 30 minutes.

Those who best the trail ring Tinker’s Bell at the top of the mountain and a take in a first-class, 270-degree view of the Caribbean. Since I didn’t ride up all the way, I settled for the incredible view and left the ringing of the bell for the chosen few. “That was a hoot,” I exclaimed to Daya on my return.

Don’t let the quad-burning vision of Tinker’s Trail give you the impression that Bike St. Lucia is only for gung-ho gear-grinders. A novice rider at best, Daya was equally able to enjoy our rides together through the plantation. We stopped at the ruins of an 18th-century sugar mill, explored an old church, and marveled at a three-million-gallon freshwater reservoir. And we returned to that isolated swimming hole — ideal for cooling off.

St. Lucia’s endless beauty continued underwater on the scuba portion of our vacation. Dive sites with picturesque names such as Coral Gardens, Fairyland, Superman’s Flight, Gran Calle, and Jalousie (named after another old plantation nearby), provided easy diving, with most sites a mere five- to ten-minute boat ride from the resort.

St. Lucia offers exceptional diving, with good visibility and water temperatures in the 80s. Most notably, the sponges and soft corals have some of the most vivid colors I have ever seen in the Caribbean — oranges, blues, purples.

The manager of the resort’s Scuba St. Lucia explained that hot water from the island’s dormant volcano, flowing into the ocean from underwater vents, might be responsible for the brilliance. He also said that since most dive sites lie within the island’s Marine Preserve, underwater treasures are left to thrive and bloom.

The reefs circling the island abound with queen and French angelfish, blue chromis, creole wrasse, scorpion-fish, spotted moray eels, squid, and my favorite, the juvenile spotted drums, with their long, flowing dorsal fins. I even saw a rare yellow frogfish on a wreck dive. The night diving is exceptional, with octopus, crabs and lobster dwelling just a few hundred feet from the Anse Chastanet beach.

My most memorable diving experience came while exploring the wreck of the Lesleen M. Not a technical dive by any means, the 165-foot freighter, sunk on purpose for a site in 1986, sits in 80 feet of water. With its many open swim-throughs and large cargo area, the wreck is fascinating for both beginners and more advanced divers.

The dive was full of surreal surprises. Finning up the stairs from the cargo area, I entered what appeared to be a glass wonderland. Reflected on the mirror-like ceiling I saw soft corals, fans, hydroids and sponges and a school of red squirrelfish with their large eyes, unafraid and inquisitive of the intruder.

In actuality, the ceiling “mirror” was caused by a build-up of trapped air bubbles from previous divers, creating a silver, mercury-like surface. Since the passageway around the deck was open, the incoming light provided the perfect environment for underwater flora and fauna. I swam around the passageway several times in both directions, feeling like a kid in a carnival attraction.

The visual feast continued throughout the resort itself. Anse Chastanet is a virtual tropical art gallery, with both public areas and accommodations decorated with original art, from murals to ceramic tile paintings. In addition to works by local painters and sculptors, artists from Europe as well as elsewhere in the Caribbean have added their touch to the ever-expanding gallery-resort.

Needless to say, this sensuous, exotic locale attracts many honeymooners. Adding to the romance, dinners are by candlelight, with live music — reggae one night, smooth jazz the next. Innovative menus offer local and international flavors. Two of my favorite dishes were the salmon and artichoke fish cake with lime cream, and the poached grouper with local wood-smoked bacon.

An adventure sport destination as well as a romantic island getaway, it’s easy to see why so many travelers — just like me — are mad about St. Lucia.