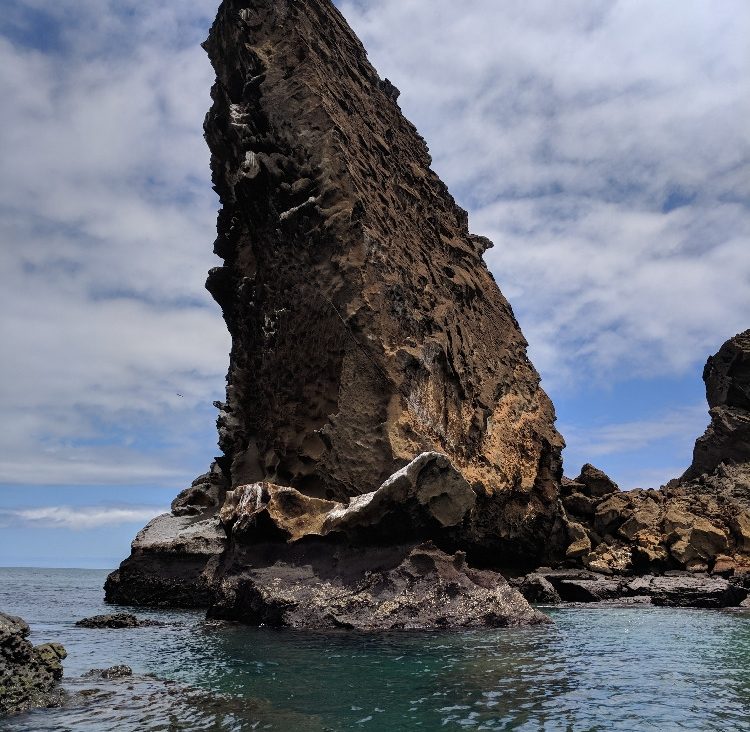 There were 15 of us, strangers to each other, headed up to Isla Bartolomé on a powered catamaran with no idea of what to expect.  This excursion was a last minute change to our action-packed itinerary of hiking, biking, snorkeling and kayaking.  My wife and I had arrived at Puerto Ayora on Santa Cruz Island the day before and the hotel agent said to be downstairs the next morning at 5:00 AM with a bathing suit. Their kitchen would not be open. Maybe they could get us coffee; maybe there would be breakfast on board the boat.  Snorkeling would be involved. Maybe hiking, too.  In the Galapagos, itineraries are more like suggestions and you can never be sure of anything.  It pays to bring everything you might need, including food, everywhere.

Shortly after boarding the crew served us a 5-star breakfast and while eating, I talked with a couple from Munich, Germany. We cruised for about 2 hours, spotting blue footed boobies standing on shore, frigate birds soaring through the air and dolphins swimming alongside the ship.  During the cruise we slowly got to know some of our traveling companions for the day.  In addition to the couple from Munich there was a couple from Hanover, Germany and two women from Stuttgart, Germany – Erika and Angela (not their real names). I had been to Stuttgart a few years ago and it seemed we had a lot in common.

Eventually the incredible teetering spire of Pinnacle Rock, the iconic symbol of the Galapagos, hove into view.  Skies were grey as we approached but within an hour the sun was out and the water turned sparkling hues of green and blue. At the foot of Pinnacle Rock there was a gorgeous semi-circular beach of tan sand, surrounded by green vegetation. It was remote – there were no other boats or tourists in sight, and spectacularly beautiful.  Cruising around Pinnacle Rock, it took on a different appearance from every angle. A solitary Galapagos penguin, the only penguin that lives north of the equator, stood on the end of a black volcanic promontory like a sentinel on guard duty.

Pinnacle Rock – The Iconic Symbol of The Galapagos

At Sullivan Bay, on the east side of Santiago Island, we took a dinghy to shore and the guide took us on a hike across the vast lava fields, barren except for a few lava cacti and the silvery Tiquilia, the only plants that can survive the volcanic soil.  The lava flows made patterns that looked like giant snakes slithering down the mountainside.   Wooden stairs lead up to the high point of the island with amazing views overlooking Pinnacle Rock and the other islands.  After a quick snack on the catamaran, we got back on the dinghy and went snorkeling around Pinnacle Rock.  There was the usual array of brightly colored tropical fish and starfish with orange dots clinging to the bottom like suction cups to a glass window pane.    At the dock we said goodbye to everyone – since it was a land-based tour the chances of seeing anyone from this group again seemed remote.

The next day it was up at 5:00 AM to catch the 7:00 AM speedboat to Puerto Villamil on Isabela Island.  Puerto Villamil is a small town, about 2200 residents and according to the guidebook “isn’t well developed for tourism” – just our kind of place.

At Las Tintoreras, a bunch of ragged black lava grottoes sticking out of the water, there were hundreds of black land iguanas laying all over each other.  With the black and white spikes running the length of their body, it looked like someone had glued combs to their backs.   A baby sea lion cavorted in the tidal pools, while brilliant red crabs ran furiously about the frozen black lava.  Arriving back at our hotel we were surprised to find Erika and Angela checking in at the front desk.

The next morning, we got on a bus to the trailhead leading to the top of Sierra Negra.  Erika and Angela were already aboard – coincidence or synchronicity we couldn’t be sure.  We hiked through the mist at a leisurely pace to the summit. The solid black caldera of the extinct volcano is monstrous, 6.2 miles in diameter and 656 feet deep.    At the summit, the sun was burning off the clouds and it looked like steam rising from a giant’s frying pan. The trees got smaller and the vegetation sparser, as the terrain changed from forest to desert. The vegetation slowly disappeared and soon there were only a few cacti growing, not even the silvery Tiquilia we had seen at Bartolomé.  As we reached Volcán Chico even the cacti disappeared, replaced by a riot of colored rock.

Back at the hotel, two bikes were waiting for us, so we rode out to explore Puerto Villamil. A dirt track following the shoreline lead out to the Wall of Tears, passing by an above ground cemetery and many small beaches.   That night at dinner Erika and Angela regaled us with tales of their adventures in Kenya and South Africa. At the end of the meal we said goodbye for the final time.

Day 5 involved a boat trip to Los Túneles (aka Cabo Rosa), a series of semi submerged lava tunnels, for snorkeling and a short hike.   The guide tried his best and showed us striped eels, sharks and sea turtles, but there were too many of us, and we ended up kicking each other in the face with our flippers.  The water was so shallow, it was impossible not to let your flippers hit the bottom.  I cringed as I saw the turbidity being churned up in the water and felt a pang of guilt for being there, even though 97% of The Galapagos is set aside as a national park and great strides are being made in eliminating invasives, reducing the impacts of tourism and restoring endangered species.

The Beauty Created by Lava Rock

Sights, surprises and serendipities too numerous to mention in this article abounded: the Charles Darwin Center tortoise breeding pens, the opuntia cacti that look like giant lollipops,  locals folk dancing at night, brightly colored glass murals, the incredible seafood bonanza every night on Calle Charles Binford.  After 2 more days relaxing in Puerto Ayora, we flew from Baltra to Quito for the flight back to the US.   We arrived at the gate and found Erika already there, waiting for the same flight.  This time there was no doubt, it had to be synchronicity.

Article and Photos by Dennis Blanchette