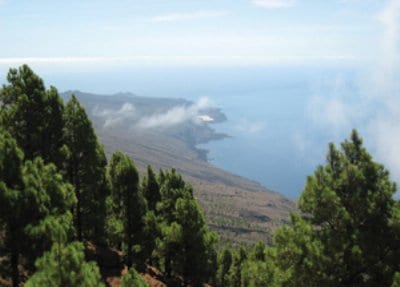 The Canary Islands were a constant surprise — and a very pleasant one at that.

My previous impression of the Canary Islands, based on limited secondhand knowledge, was that they were a great beach destination. That part proved to be true. However, my interests went beyond lying on the beach. As always on holidays, I wanted to experience a unique culture, feel nature, eat good food and drink good wines and, if possible, get in a day or two of scuba diving. On all of these counts, I would not be disappointed.

I spent a week in the Canary Islands on my way to Europe this summer. Located only 60 miles off the coast of Morocco, the Islands are actually an “autonomous community” of Spain (similar to a U.S. state). They connect to Europe via daily flights by scheduled airlines as well as charters. Flights to Madrid and Barcelona are frequent throughout the day from several of the islands.

A new wide-body service by Air Europa makes it easy for Americans to get to the Canary Islands without having to first go to a European capital. I flew on the weekly direct flight from Miami International to Tenerife, the most populous of the islands. This overnight flight arrived in Tenerife in the morning, and I stayed at the beautifully restored Hotel Nivaria, a 16th-century mansion still owned by the Marquises of Celada. It was located directly opposite the fine colonial-style Plaza del Adelantado in the World Heritage city of San Cristobal de La Laguna. My room overlooked a tree-lined courtyard, and with the large windows flung open the tropical breezes did their magic on my jet lag.

The sounds of a brass band awoke me from my late sleep. It was mid-afternoon, and I wearily made my way down to the Plaza, just in time to see the first of five bands pass through in native costume, along with herds of goats, joyous singers, carts laden with fruits and vegetables, and men carrying statues of Saint Bartolome and the Virgin. Men and women on the carts flung produce to the smiling crowd along their path, and I was the proud recipient of a large potato. I was fortunate to have arrived on the 24th of August, the Fiesta Patronale (patronage festival) in honor of Saint Bartolome.

The Edge of the World

The following morning I flew to the nearby island of El Hierro. This island was once considered quite literally “the edge of the world.” Before Christopher Columbus’ discoveries in the late 15th century, El Hierro was thought by Europeans to be the world’s westernmost landmass. It actually defined the Meridian until it was replaced by Greenwich in 1884.

On arrival I was taken aback by the stark landscape of this windswept volcanic island. The flight had been less than one half-hour, and I was still contemplating the greenery of Tenerife. But as I drove through El Hierro on my way to the fishing town of Restinga, my whole being started to adapt to the majestic beauty of the island. The road passed through whitewashed villages and soft green pine forests, and the natural world seemed alive with a raw magnificence. I felt as if I were in Greece or Spain’s Andalucía.

I had a small apartment in La Restinga, which proved to be ideal. A short walk to the center of town made me feel as if I was actually living there and not just a tourist. I was buying groceries, going on-line at the local café, and waving to the guys on the corner. The restaurants served freshly caught fish and one of my favorite Canary Island specialties, papas arrugadas — unpeeled potatoes boiled in salt-water and served with mojo picon, a hot sauce of oil, garlic, chili peppers and paprika.

La Restinga served as my base during my stay on El Hierro. Many incredible dive sites were a short ten-minute boat ride from the harbor — since 1996 part of the Mar de Las Calmas Maritime Reserve. Being protected from commercial fishing and even some pleasure boating, the dive sites are rich in fish life and abundantly colorful undersea flora. The water is crystal clear. A fascinating phenomenon along the coast near La Restinga is the extraordinary calmness of the sea — hence the name Mar de Las Calmas. The volcanic mountains of the island act as a very effective wind break from the constant trade winds, making this a diving paradise. Beyond this “wind shadow” we could see whitecaps!

Present at the Creation

Old lava flows descend to the water line, making this a truly dramatic coastline. The last volcanic eruption was in the 1780s, and each of these old eruptions presented a breathtakingly unique treat for the eyes and even evoked a unique response. Our guide Paolo used a wonderful metaphor. In a desert, with all of its beauty, one gets a sense of dying. On volcanic islands, however, one feels the cycle of birth and growth, of life growing between the rocks, as if we were witness to the formation of soil. El Hierro’s history seemed palpable, far beyond the feeling one gets walking amongst archaeological ruins.

Historically, the Canary Islands — the only originally inhabited islands among the archipelagos off the coast of Africa — were at the crossroads between Asia, Africa, Europe and the Americas. Bananas, originally from Asia, were first cultivated in the Canary Islands before finding their way to the Americas. Sugar cane was first introduced on the Islands before making its way to the Caribbean. Christopher Columbus left for “the Indies” from these very same islands.

For the hiker, El Hierro offers miles of pristine trails. One interesting walk is to trace the routes of the seasonal grazing and planting migration from the mountains to the sea that entire families traversed during the 19th century and even later. There is no mass tourism on El Hierro, and whatever activity you choose, you will not find a backup of other travelers. In no time I became enamored of the outdoor lifestyle of farms, fishing, and small hillside villages that was so evident on this island.

Returning to Tenerife was a bit of a reality shift, although its own unique beauty made the transition a quick one. From my hotel balcony I watched paragliders descend from the clouds and then ride the updrafts with their brightly colored parachutes. They would actually jump off the volcanic cliffs thousands of feet above the coast, then gently descend to the beach. With their constant winds (the northeasterly trade winds that brought Columbus to the New World) the Canary Islands are world-renowned for windsurfing, parasailing and paragliding.

Although a bit more conservative in my approach to heights than these paragliders, I did take the cable car to the top of Mt. Teide, some 12,200 feet above sea level and the highest point in Spain (and, for that matter, the highest point in any Atlantic archipelago). From the summit I was able to see several of the Canary Islands: La Gomera, El Hierro and La Palma to the west, and Gran Canaria and Fuerteventura to the east. The mountain’s volcanic history is obvious in its geography; its various shades of brown, orange and black create the sense of an otherworldly, lunar landscape. But the landscape is not without this-worldly amenities. I had an incredible lunch at the government-run five-star Paradore hotel/restaurant with views of the mountaintop and the hundreds of plant species that have developed in these unique volcanic soils.

Speaking of food — why not wine? The Canary Islands were, due to their isolation, able to avoid the philoxia that decimated the European vineyards in the 19th century. The Islands still have 100 of the original varieties from that period. Each wine area on the island is unique due to its soil, altitude and cloud-controlled moisture. The small villages nestled in the valleys produce very distinct grapes. For the interested traveler there is a designated “Wine Route” (part of Spain’s illustrious Ruta del Vino program) offering the opportunity to stay on a farm, or in a local home in the wine-growing area. Many of the wineries offer tours and tasting. This is not to be missed as most wines from the Canary Islands are consumed in Europe and seldom make it to the States. Even coming from California, I was impressed.

My time to leave the Canary Islands came too soon! I had visited only two of her seven islands. The natural wonders of Fuerteventura and Lanzarote were calling me for a return trip. These islands were an ongoing enticement for Christopher Columbus (partly due to his having a beautiful mistress there). He braved the high seas to return; luckily I will have an easier time of it.

• For incredible hill walking and hiking opportunities on El Hierro, including tracing the seasonal grazing and planting migration from the mountains to the sea, contact Paolo Cossovel at Atlantidea — www.atlantidea.net, . He is an excellent, passionate guide and speaks perfect English.

• All of the Canary Islands are volcanic in origin, and are the only place in Spain where volcanic eruptions have been recorded in modern times. Mount Teide (Pico del Tiede in Spanish) on Tenerife is the third-largest volcano in the world from its base. This 12,198-foot-tall mountain is considered an active volcano, having last erupted in 1909.

• Some historians believe the Canary Islands to be the location of the legendary continent of Atlantis.

• The Canary Islands are basically an archipelago consisting of seven islands and many other islets. They have been called by various names, including the “Fortunate Islands” and the “Garden of Hesperides.”

• Four of Spain’s 13 national parks are located in the Canary Islands.

• The islands can be wet or dry, depending on their position relative to the northeasterly trade winds.