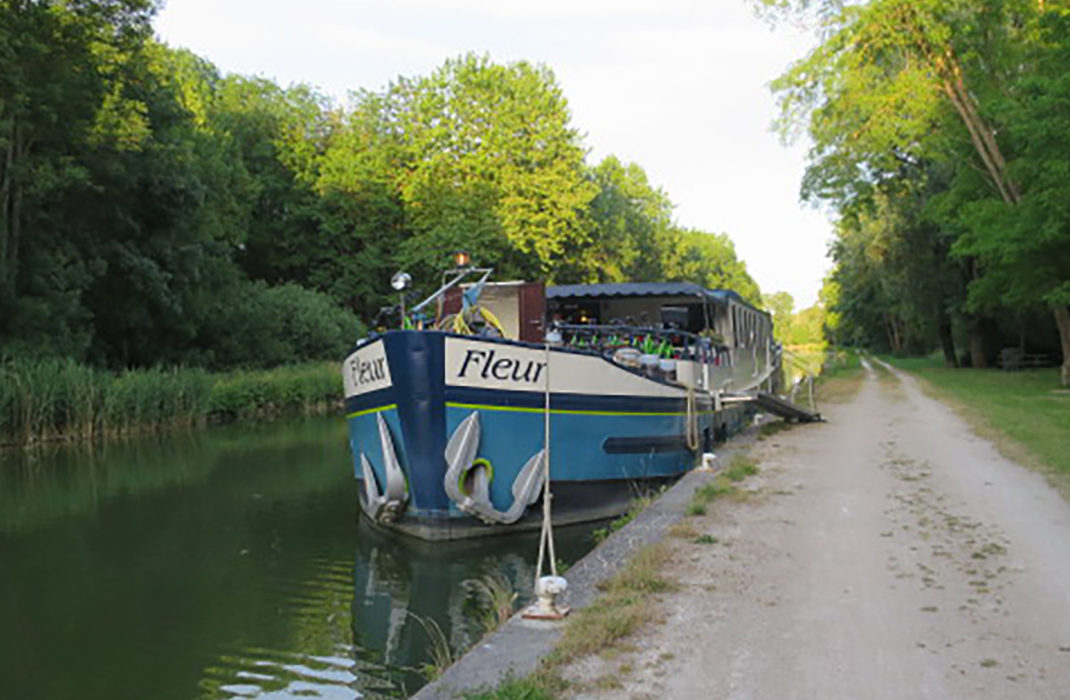 When Louis XVI and Marie Antoinette entered the gates of Fontainebleau Palace during the 18th century, local villagers looked on with awe. But “astonishment” better described the reactions of tourists when our group of nine bicyclists rode through the main entrance of the grand castle last summer.

We were Americans from all over the US, mostly edging into our retirement years, and all fit and healthy. Our common bond is we loved the outdoors and were enthusiastic recreational bicyclists. Most had explored the cities of Europe earlier in their lives and now wanted to see the countryside, small towns, and rivers of France. We came together quickly as we shared our excitement about our explorations in the week ahead. 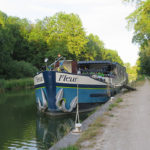 The six-day itinerary would take us along a series of canals, dug between the 17th and 19th centuries, connecting the major rivers of France. The 5,000-mile network of navigable French waterways consists of 100 rivers and canals that were constructed to aid in the transportation of goods.

Each night after the day’s ride we would return to our staterooms on the vessel that had gone ahead to meet us at the day’s destination. It was a great convenience to meet up each night expecting to find our belongings exactly as we had left them that morning and knowing that wonderful accommodations awaited us each evening.

Our trip started in the medieval town of Montargis, located at the juncture of the Loing River and the Briare Canal. After stowing bags in our cabins, we decided to stretch our legs after our trans-Atlantic flights. Although quite modern, Montargis retains medieval charm in its downtown area. The town bills itself as the “Venice of the Galinais” due to its many canals and bridges. Numerous plaques dedicated to Joan of Arc commemorate her visit to the city after being wounded in her unsuccessful attack on Paris in 1429.

Our group had a destination—a specific shop on Place Mirabeau. It was here, in this original location in the 17th century during the reign of Louis XIII, that pralines were invented. We purchased enough of this crunchy confection made from almonds in cooked sugar to assure quick energy infusions during our daily rides.

We then returned to Fleur, our luxurious canal barge home for the next seven days. The vessel, formerly a cargo barge, was equipped with air conditioning and Wi-Fi. In 2001 it had been rebuilt as a floating boutique hotel with dining area, library, salon bar, lounge, and outdoor sundeck with awnings. On the lower deck, each of the 10 twin-bed cabins had its own bathroom. We had plenty of room to spread out since the barge was 128 feet long with an ample 17-foot beam. 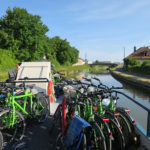 Also on board were 20 new Gudereit bicycles equipped with the state-of-the-art “in-the-hub” gears. Compared with bikes common in the US with Derailleur gears, these mechanisms are easier to shift, don’t expose the chain to slipping off the sprockets, and don’t risk rubbing chain grease against legs.

Every morning we set out on a 20- to 40-mile ride through farmlands, forests, and fields. Along the way we explored small hamlets with local museums, sculpture gardens, and historical attractions. Each village where we stopped taught a mini-history of France. By midday we would stop at a cafe and order a local dish for lunch. By late afternoon we would drop down along the canal’s shady banks, and pedal to the rendezvous point with the barge at a new location along the Briane/Loing Canal.

Our crew included a captain, mate, housekeeper, and chef. Our guide Geoff, a bilingual Englishman, and Gustav, the bike mechanic, assured we would be safe and wouldn’t get lost. Ellen, the Dutch chef, prepared meals from fresh farm produce and locally sourced provisions paired with a selection of fine wines. Recipes highlighted French cuisine as well as traditional dishes from Spain and Italy.

The first morning, we fueled ourselves with breakfast while Gustav unloaded our bikes ashore and made final adjustments for our comfort. After Geoff gave a safety briefing, we pedaled off for our first adventure. Gustav trailed behind driving the sag wagon loaded with spare bike parts to keep us going in the event of a breakdown. 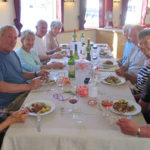 A 15-mile ride brought us to Dordives, which at first seemed to be just another charming French country village. But at the Museum of Glass, we learned that due to the fine silica sand found in the region, this town had been the center of glass manufacturing for all of Europe dating back to the Mesopotamian era. It had once supported hundreds of glass manufacturers, and for hundreds of years the famous sand was shipped throughout Europe and was used almost exclusively by the Venetian glass fabricators on the island of Murano.

To meet the needs of America’s 19th-century railroad industry for heat-resistant glass for signal lanterns, Dordives developed and supplied a special “thermal glass” made by adding borax to silica. By removing lead, this was the first glass used for cookware, Today Dordives and the neighboring towns continue to be major centers for the manufacture of Pyrex cookware, crystal, and fiberoptic cables.

Our bike ride continued on back roads through shady woods and beside open farmland. After two hours we turned onto a dirt trail that led us back to the Loing Canal where Fleur was moored near Néronville surrounded by forests. After hot showers and a change of clothes, we reconvened on the forward deck to enjoy cocktails as we watched the sun set over the bow.

Bicycle trips allow riders to stop at little-known gems of museums that few have ever heard of, and the next day offered a good example. At 8:15 AM we were back in our saddles riding to the town of Égreville, home to the Bourdelle Garden-Museum.

Sculptor and painter Antoine Bourdelle, together with his colleague and friend Auguste Rodin, was one of the pioneers of 20th-century monumental sculpture. The trees, shrubs, and flowering beds along the meandering pathways create a harmony with Bourdelle’s 57 sculptures placed strategically throughout the gardens. 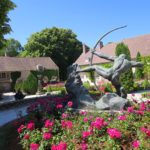 Our necks continually strained upwards as we gazed at the more-than-life-size bronze statues of the Dying Centaur, Hercules the Archer, Adam and Eve in the Garden of Eden, and numerous Art Deco-style allegorical statues. This short visit prompted several of our group at the end of our trip to visit the Musée Bourdelle in Paris, which contains more than 500 of his works.

By now we were getting used to IBT’s unique “corner system,” which assures that no one takes a wrong turn and gets lost. Whenever we approached a turn on our route, Geoff would point to the corner, a signal that the rider directly behind him should stop, dismount, point the way for the following riders, and then rejoin once the last rider (called “the sweep”) arrived. Often when we rode through a medieval village with many twists and turns, more than half our group found themselves stationed at various intersections. Only after we exited the town did we reunite.

Following our visit to Bourdelle’s Garden Museum, we pedaled past fields of wheat, barley, and canola to the industrial town of Nemours. Not coincidentally Nemours is the sister town of Wilmington, Delaware, home to du Pont de Nemours & Company, commonly known as Dupont Corporation. The founder of the American company, Éleuthère Irénée du Pont de Nemours, and his family immigrated to America in 1800 to escape religious persecutions against Huguenot Protestants. 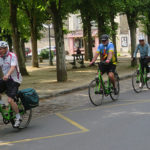 Completing our 25-mile ride for the day, we returned to Fleur, which was peacefully moored just outside the city beside a quiet forest. Keeping with different national themes for our dinners, tonight was Italian night. Chef Ellen, having purchased fresh veggies and produce that day, prepared an Italian salad, lasagna, and tiramisu for dessert, sufficient both to satisfy our taste buds as well as replenish the calorie depletion from the day’s ride.

Our next day’s adventure took us to the small medieval town of Moret sur Loing where our canal, which started at the Loing River, ended at the Seine River. A local guide gave us a tour to locations in the village displaying the works of Alfred Sisley, the British landscape painter who along with Monet, Renoir, and other French greats, helped found the Impressionist movement. Sisley spent the last years of his life in Moret creating many of his most acclaimed paintings.

The nearby bicycle museum, Conservatoire du Vélo, showcases a large selection of antique two-wheelers. Our visit gave us a greater appreciation for the modern, 11-gear bicycles we mounted every morning.

We also learned how the bicycle culture in Europe differs from the US. Whereas bicyclists in Europe tend to be either competitive athletes training for races or country housewives riding to the town market, in the US we often ride simply for pure recreation. This explains why we often received strange stares from the locals as we rode through the villages.

History buffs will appreciate that Moret was the site of Napoleon’s last battle victory in 1814 before abdicating at Fontainebleau and banished to the island of Elba. The next morning we followed Napoleon’s journey to Fontainebleau but arrived at the grand entrance as tourists, not a disgraced leader.

Our guided tour took us through a seemingly endless number of beautifully furnished salons designed for the Sun King Louis XIV. In more recent times the chateau served as Nazi Headquarters in World War II and subsequently NATO Headquarters.

Much as we enjoyed the grandiosity of Louis XIV, we were happy to get away from the crowds of tourists and back on our bikes riding through the forests of Fontainebleau, which today are the largest untouched woodlands in France. We caught up with Fleur at Melun, a small town on the outskirts of Paris, where we settled in for another pleasant evening in a peaceful setting.

The next day we pedaled to Evry where we rejoined our barge for lunch on board. That afternoon we watched the transition as the wooded shorelines gave way to a build-up of factories and commercial buildings while we cruised along the Seine into the center of Paris. 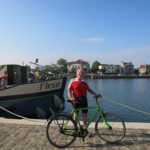 With our legs strengthened from pedaling several hundred miles across the French countryside by bike, we were in great shape to spend the next day walking to well-known sights such as the Père-Lachaise cemetery, which holds graves of the celebrated including Oscar Wilde, Jim Morrison, Frederic Chopin, Yves Montand, and more. We also strolled to Nôtre Dame, the Louvre, and finally just ambled along the banks of the Seine.

At our farewell dinner aboard Fleur that evening, we exchanged addresses and then rather than indulge in farewells, we began planning to get together next year for another bike-and-barge cruise.